By Max Preston
Posted on April 11, 2016 | Sports | Comments Off on Women’s tennis picks up important win over UCA 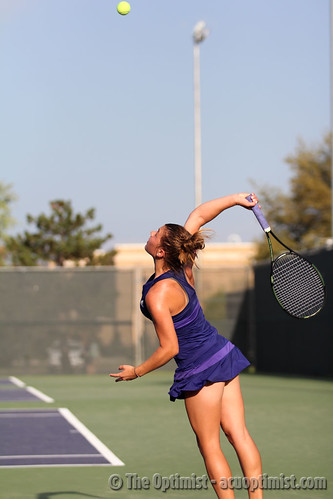 The women’s tennis team won against the University of Central Arkansas Saturday, giving them second place in the Southland Conference. The women won by a score of 5-2 giving them an 18-6 overall record (.750 pct) and an 8-2 conference record.

In singles, the women earned four victories out of six matches played which clinched the team victory by earning four of the seven points given. Senior Nada Marjanovic, junior Erin Walker and sophomores Lucile Pothier and Whitney Williams all picked up singles wins. Walker won her match 7-5, 6-4, Pothier won by a score of 7-5, 1-6, 6-1, Marjanovic won 6-2, 6-2, and Williams won her match 6-2, 1-6, 10-6.

“The win was a big one for us, to be able to finish off strong with a great conference win for our last conference match at home was big,” Majanovic said. “It was also really nice to get to play indoors since it was poor weather yesterday, which we think was an advantage to us. The matches were all close and we fought hard to get the great 5-2 win. We all came out with great energy and I think that definitely showed in our matches.”

“I feel very good that we got the win yesterday,” Pothier said. “Central Arkansas is a good team and I was proud of how the team fought and stayed solid the whole match. Our second place is not a surprise to me, we practiced and worked hard since last semester, we stayed in a good spirit and kept our objectives in mind during the whole semester.”

The women’s next match will be here on campus Wednesday, April 13th at 5 P.M. against Midwestern State University.