By Daniel Zepeda
Posted on April 7, 2016 | Sports | Comments Off on Wildcats hope to snap losing streak against Huskies 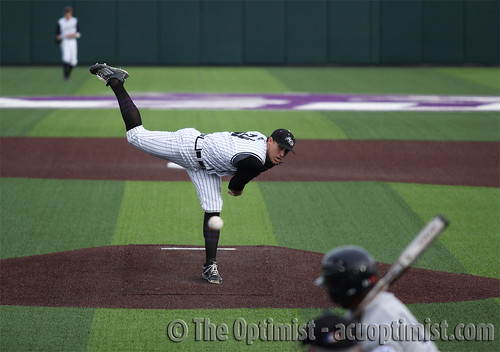 The Wildcats will take on the Houston Baptist Huskies for the first time in Abilene for a three-game series over the weekend. The past two meetings between these two have taken place in Houston with an all-time record of 3-3 for both squads.

Game one is scheduled for 6 p.m. Saturday, followed by game two on Saturday at 2 p.m. Game three’s first pitch is aimed at 1 p.m.

ACU stands at 10-17 and 2-7 in the Southland, after being swept at home against the Lamar Cardinals, who have won 12-straight games. HBU is coming off a four-game home stand in which the Huskies went 3-1. They currently rank in the middle of the conference with a 5-4 conference record and a 14-13 overall slate.

Senior Garrett deMeyere (2-4, 4.39 ERA) is expected to get the start in game one on Friday. He’ll be looking to get back on track after being roughed up for eight earned runs in 5.0 innings against Lamar. Senior lefthander Aaron Mason (3-2, 3.82 ERA) will take the mound in game two and either senior ace Kyle Carroll (2-4, 4.36 ERA) or sophomore Drew Hanson (1-2, 5.96 ERA) will get the nod in the series finale.

For the Huskies, junior righthanders Addison Russ (4-2, 2.32 ERA) and Julian Griego (1-3, 3.98 ERA) will start in games one and two. Russ currently ranks fifth in the Southland in ERA and is among the leaders in wins. Like ACU, the Huskies are at a toss up as to who to send to the mound for game three.

The Wildcats are looking to getting back to their winning ways that they achieved earlier this season. After starting off the year 7-3 through their first 10 games, the Wildcats have dropped 14 of their last 17 games, including 10 of their last 11 games.

Several of those games have come been hard-luck losses. Trailing 7-1, the Wildcats scored four runs in the bottom of the ninth inning, coming up short of a comeback win in their last game against Lamar. Seven of their most recent losses have been by three or less runs.

Senior catcher Alex Copeland continues to swing a hot bat for ACU. He leads the Wildcats with a .315 batting average along with six runs batted in and five doubles. Junior Russell Crippen comes in just behind Copeland with a .313 average and has continued to hit well during the home stand. Crippen is 5-for-12 for a .420 average, with a home run, two doubles and three RBIs, over ACU’s last four games. Junior outfielder Braxton Wilks leads ACU with 15 RBIs in addition to a .253 average.

Senior shortstop Louie Payetta is hitting .312 with a six doubles, a team-leading 15 RBIs and 13 runs for the Huskies, while senior second baseman Greg Espinosa is hitting .288 with five doubles, a triple, 11 RBIs and a team-leading 16 runs. Junior right fielder Brandon Britz ranks second in the Southland Conference with four triples. The Huskies’ number three hitter has a .282 average with a home run and 17 RBIs.