By Max Preston
Posted on April 14, 2016 | Sports | Comments Off on Wildcat tennis is victorious on senior night 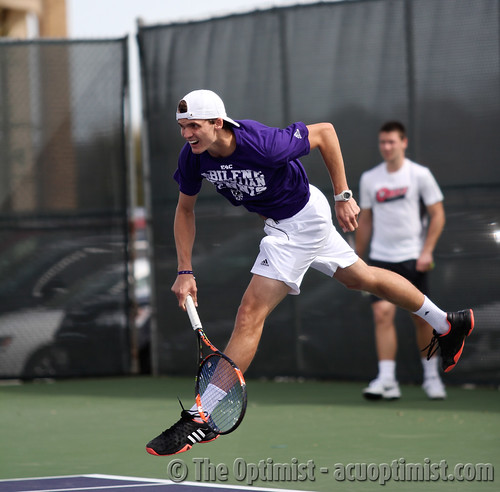 The men and women’s tennis team held senior night yesterday and sent five seniors off with wins against Midwestern State University in their last home match. The men won by a score of 5-2 and the women swept with a 7-0 win. This puts the men at an 18-8 record overall (.692 pct) and the women at a 19-6 record overall (.760 pct).

In doubles, the men won three matches out of the three played. The teams included Adams/Agritelley, Jason Proctor/Domanski, and Sheehy/Sebastian Langdon. Adams and Agritelley won their match 7-5, Proctor and Domanski won 7-5, and Sheehy and Langdon won 6-4.

“It was bittersweet playing the last home match this season,” Sheehy said. “I’m glad we secured a victory to send off all the seniors with a home win because I know they will cherish it. I’m already looking forward to playing behind a home crowd again next year.”

In doubles, the women got two wins out of three matches played. The teams included Walker/Williams, Hermsdorf/Pothier, and Marjanovic/Andrea Crook. Walker and Williams won their match 6-3, Hermsdorf and Pothier won 6-2, and Marjanovic and Crook lost 6-4

“I can only describe it as amazing.” Hermsdorf said. “Playing the sport I love for my fans, team, and coaches. Midwestern has a great team and we all came out fighting to win. It was a great feeling to win both my matches playing at home for the last time and getting the team win. There is no greater feeling than playing for God and giving all you can, without any worries. It was a great day to be a wildcat tennis player.”