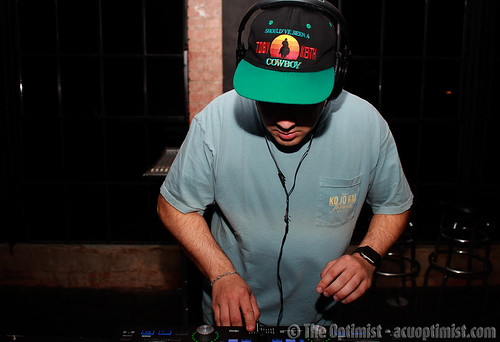 Garza has been the Friday night DJ of Stairs, a downtown nightclub that opened last November, and will be playing his last set this Friday from 9-12 p.m.

Garza bought his first turntable in January and began performing at friends’ houses. After getting a few house parties and sound mixes under his belt, Garza was able to snag his first gig in front of an audience at Stairs in February.

“The first time I talked to Rudy it seemed like he was really in-touch with what people were coming here for. You look around the place on a Friday night and it’s full, in part, due to Rudy,” said Tim O’Connor a part owner and general manager of Stairs.

Although he only just started DJing, Garza’s love of music and interest in performing began a few years ago.

“I’ve listened to music with deep intention for a long time,” Garza said. “I’ve been a musician since sixth grade and started playing personally curated playlists off of my phone for my friends when I was a sophomore here.”

One of the reasons Garza said he wanted to start performing was to influence Abilene’s reputation for lacking in entertainment.

“I feel like a lot of people complain about Abilene,” Garza said. “They say, I wish we went to a big school so we could have better parties or I wish we lived in Austin or Dallas so we’d have better places to go out. My thing is that all you really need is a room, some speakers and good music.”

For Garza, DJing is more than pressing a few keys on a laptop or scratching a couple discs. It is also about the feeling he can create with music and how it affects the setting he is performing in.

“DJing is really cool because you get to read a crowd. You’re facilitating the vibe and are essentially covering the room in the mood that you want it to be in.”

Garza also said the connection he forms with the crowd is what makes DJing exciting. The first night he performed, Garza said he was nervous, but after getting people on the dance floor, he saw the bond he shared with the dancers.

“Every night you’re trying so hard to get people on the dance floor and the first good memory is when everything clicks and they start dancing. The next great memory is whenever you look down at the crowd and it doesn’t matter what you’re playing because you’ve earned the dance floor’s trust,” Garza said.

Although DJing seems like an easy side job, Garza said it is harder than it looks. He said the environment can be stressful because his ability to perform directly influences the dancers’ night and the club’s bottom line.

“I’m having the time of my life, but I’m working,” Garza said. “If you play a great song, then everyone is pumped, but if you play a terrible song then people are disappointed. It becomes a personal affirmation thing– when it’s going good you feel great about yourself, but you feel terrible about yourself when it’s not.”

Garza gets inspiration for his mixes from a variety of sources. His favorite artists include Led Zeppelin, Kendrick Lamar and DJ Sober. Garza also said his mixes are inspired by his infatuation with disco and 70s and 80s dance music.

“For me, I like breaking everything down to the core elements of dance. I get inspired by house music, acidy European dance stuff or American 70s disco with awesome high-pitched male vocals. If it’s got the right bass line and gets people dancing then it’s something that I really can take from,” Garza said.

DJing has also given Garza an appreciation of how valuable time is in the music industry.

“I’ve got a bank of 400 songs and will play 25 percent of that,” Garza said. “It becomes really crazy how valuable three minutes of time is during a set because you could play so many other songs than the one you’re choosing.”

As Garza’s last set at Stairs approaches, he looks toward his future as a DJ. After graduation, Garza is moving to Austin and will most likely pursue DJing as a side job as long as it fits into his lifestyle, career, relationships and finances. His time DJing in the Key City may be coming to an end, but Garza’s time spent here will have a lasting effect on him.

“I will absolutely miss DJing in Abilene,” Garza said. “This will probably be the only time in my life that I get to play for a crowd of people that I know personally – which makes creating a good time that much more worthwhile for me.”