By Erika Bolado
Posted on April 20, 2016 | News,Showcase | Comments Off on Steven Moore addresses bullying in a new children’s book 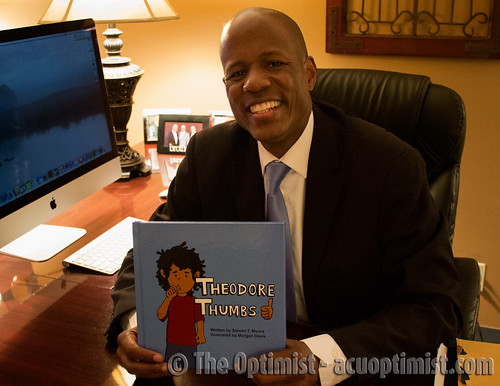 Steven Moore, an associate professor in the Department of Language and Literature and director of the McNair Scholars Program, said he was inspired by firsthand experience while growing up and other people he knew in the same situation.

“There is so much bullying and mean-spiritedness in our schools today,” Moore said. He said he hopes to inspire and help people recognize there is an issue to be solved.

Theodore Thumbs tells the story of a young, introverted boy who is bullied at school but keeps a positive attitude. Moore wrote the book to address the issue of bullying and hopes school systems, families and communities take action on the serious matter that takes place regularly in the country.

“I was bullied a little bit, but I always had my twin brother to protect me,” Moore said. “I faced some of that because of my skin color, and my twin brother was in the same situation. People had a hard time embracing differences. So I guess that also encouraged me to go ahead and write this story.”

“One of my favorite parts of the story was the rich symbolism that you get to see play out,” Mitchell said. “I loved the fact that it is very versatile and it’s very broad.”

The title Theodore Thumbs comes from when Moore used to suck his thumb as a little kid. His brothers then gave him the nickname “sucky thumbs.” However, Moore said “sucky thumbs” wouldn’t have been appealing to most people, so he decided Theodore was more attractive and cool when paired along with “thumbs.”

Moore said he wants readers to pick up on the message of appreciating the differences in people.

Throughout Moore’s college years, the idea of writing a children’s book was constantly in his mind.

“I am glad I never let that dream go,” Moore said. “It was a dream that started in college, and I think I got really serious about writing it five years ago. I think adults will really laugh, but I think the kids will pick up from the issue of bullying and what it means to be kind, loving and being more compassionate in this world.”

Moore started the book by writing lines on napkins, sheets of paper, or receipts while traveling around the country attending conferences. Then he sat down and allowed the book to reveal itself. When the book was completed, he said he had a difficult time trying to find the right publisher. D Grant Smith, host of The Appetizer radio show, introduced Moore to Callie Metler-Smith, the publisher of Clear Fork Publishing.

“I am very excited to work with him; the book kind of reminds me of Charlie Brown on how he fumbles through things,” Metler said.

Moore said he loved the goals of the company, which provides relationships between the publisher, author and readers.

“She is a type of publisher that she wants to get to know the authors, the writers and the poets, and you are not just a number in her book,” Moore said. “And that’s what really attracted me to work with her.”

Moore said the publishing process took about five to six months.Before he was introduced to Metler-Smith, Moore met Morgan Davis, an ACU alumnus who illustrated the book. The next step for Moore is to attend book signings and book fairs in and out of Texas. His first book signing is set this week in Houston at the Texas Library Association, the largest statewide conference in the country. Moore already received a significant amount of acclamation from friends, students and family.

“Now that it’s finally done, I get to enjoy meeting people and talking about the book,” Moore said.

Although, it is an exciting time for Moore, with four book signings lined up this year, he is not a fan of traveling because it means he has to leave his classes for a few days.

“I love the classroom and so I never want to be away from my students,” Moore said.

Moore’s next book project is about Michael Jackson and Langston Hughes. He hopes to write more scholarly articles and foresees writing a sequel to Theodore Thumbs in the future.