By Abbey Bowling
Posted on April 29, 2016 | Sports | Comments Off on Softball wins against Texas Tech 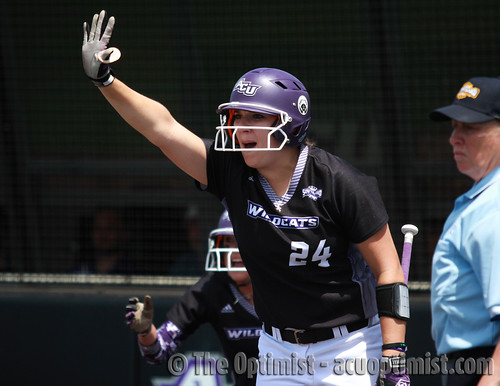 The softball team traveled to Lubbock on Thursday and won the non-conference game against the Raiders, 3-1, raising their overall record to 19-18 and bringing them to a game above .500 for the first time this season.

Redshirt sophomore Hannah Null pitched a complete game, putting in 7.0-innings of work with five strikeouts and allowing one run on eight hits. She managed to shut out Texas Tech until the bottom of the sixth, when she gave up a home run to left field. Her current ERA is 3.0 and she has 91 total strikeouts this season.

Junior Taylor Brown put the Wildcats on the board early in the game with an RBI single in the second, which allowed senior Cara Hoover to score an unearned run. Freshman Miranda Herron continued the scoring into the third with her first home run of the season, giving ACU a solid 2-0 lead until Tech managed to smash a home run in the sixth. Sophomore Alyson Bishoff singled in the seventh and advanced to second on an error by Tech’s right fielder, as junior Alli Spivey scored ACU’s third and final run.

Tech left eight runners on base but was unable to capitalize on any of those opportunities and two of Tech’s three errors also led to ACU’s first and third runs.

The Wildcat victory was the first time they’ve managed to beat Texas Tech since their rivalry began back in 1997. ACU will take on Sam Houston State University this weekend in a three-game Southland conference series here in Abilene.