By Abbey Bowling
Posted on April 29, 2016 | Sports | Comments Off on Softball to host Baylor Wednesday night 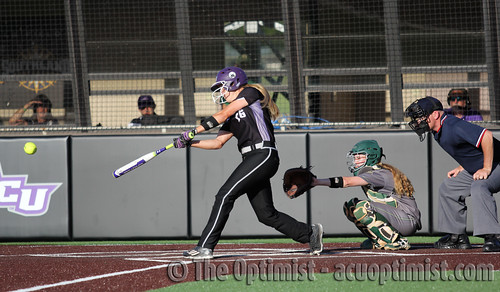 The Wildcats will face Baylor University on Wednesday at 6 p.m. in a non-conference game at Poly Wells Field.

Baylor has a 39-12 overall record, is currently hitting .312 as a team, and is coming off a six game winning streak, four of which have been shutouts. ACU is 21-19 overall, after winning two out of three games against Sam Houston State University last weekend.

The first game against Sam Houston ended in a 5-2 win, thanks to junior Casey-May Huff‘s walk-off grand slam in the bottom of the seventh. ACU’s other run came from senior Cara Hoover‘s home run in the fourth. Redshirt sophomore Hannah Null pitched a complete game, allowing two runs on two hits with five strikeouts.

The second game also ended in a Wildcat win, 9-8, with eight different players getting at least one hit. Sophomores Holly Neese and Brianna Barnhill, junior Taylor Brown, Hoover and Huff all recorded one RBI while freshman Miranda Herron recorded five. Herron won the game when she smashed a bases-loaded RBI double in the seventh to bring home three runners and take the lead. Null pitched the first 4.0-innings and gave up five runs before senior Julia Montoya relieved her in the fifth. She pitched 2.0-innings and gave up two runs, and Huff came in to finish the game with 1.0-inning of work, one run and one strikeout.

The final game ended in a 7-2 loss. Sophomore Peyton Hedrick scored ACU’s only runs on an RBI triple in the fifth. Null started the game and put in 4.0-innings with four runs and two strikeouts, before freshman Allison Turner finished the game with three runs and one strikeout.

Wednesday night’s game will be the second meeting between the two teams, as they met for the first time last season in Waco, where the Bears managed to win the game 4-2.