Softball to face Hardin-Simmons in doubleheader

By Abbey Bowling
Posted on April 12, 2016 | Sports | Comments Off on Softball to face Hardin-Simmons in doubleheader 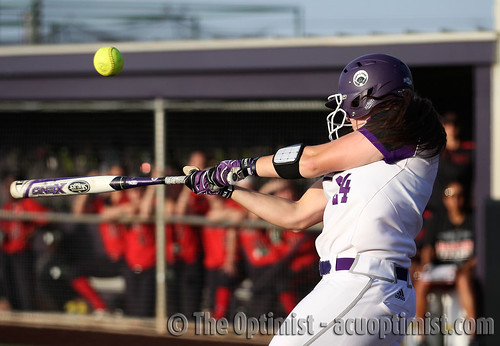 The softball team will take on Hardin-Simmons University (14-17) in a non-conference doubleheader on Tuesday, April 12 at Poly Wells Field. The first pitch is scheduled for 6 p.m.

The Wildcats will wear throwback jerseys for the games, including white tops and white shorts, for the first time in almost ten years.

The Wildcats are currently 16-17 overall and 10-5 in the Southland after sweeping University of the Incarnate Word over the weekend in a three-game series. The wins pushed them into fourth place in the conference, behind Nicholls University (10-4).

The final game on Saturday ended in a 7-4 win for the Wildcats, with a three-run homer by Barnhill to start the game, bringing her season total to six, and Hedrick scored several more RBIs. ACU batted .347 as a team during the games.

Hedrick and redshirt sophomore Hannah Null earned honorable mention for Southland Conference Hitter and Pitcher of the Week after their performances during the weekend’s games. Hedrick recorded six RBIs, including a double, a home run and four singles. She also currently leads the team with eight home runs.

Null pitched in all three games and gained two wins, one save and lowered her season ERA to 3.27. She ranks fifth in the Southland with 81 strikeouts.

Hardin-Simmons are coming off a six game losing streak and have a collective .292 batting average. The two teams have only faced each other a handful of times since their first meeting in 2005, but ACU has won four out of the five games against the Cowgirls.