By Abbey Bowling
Posted on April 19, 2016 | Sports | Comments Off on Softball looks for revenge against Red Raiders 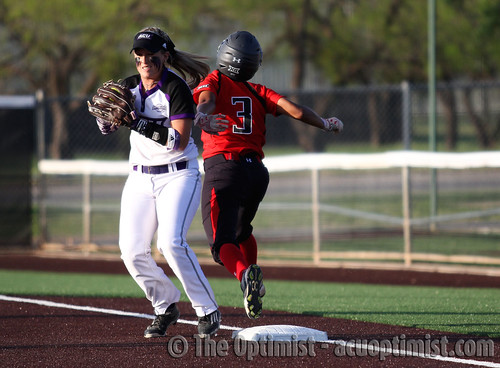 The softball team will take on Texas Tech University (19-24) in a non-conference game Wednesday night at 6 p.m. in Lubbock.

The Raiders are 4-5 in the Big XII conference and are currently riding a five game losing streak. The Wildcats are 12-6 in the Southland Conference and have a two game winning streak.

The team has been less than successful away from Poly Wells field, posting a 7-11 record for away games.

Earlier this season, ACU hosted Texas Tech at Poly Wells Field but ended up losing the game, 6-1. Redshirt sophomore Hannah Null pitched a solid 4.1-innings in the game and gave up one run on four hits before freshman Allison Turner relieved her in the fifth. Turner allowed five runs on four hits in 2.2-innings of work. ACU’s only run came from sophomore Holly Neese‘s home run in the second inning.

The Wildcats won the second game, 7-6, and the team recorded a collective 16 hits and six RBI in the 10-inning game. Barnhill scored three RBI from a three-run homer in the fifth, marking her ninth homerun of the season. Montoya ended up snagging the win, after pitching 3.2-innings and giving up just three hits and two walks.

The final game ended in a 6-1 win for ACU. Null pitched a complete game and allowed one run on five hits, while Neese, senior Cara Hoover and sophomore Peyton Hedrick all recorded RBIs.

After facing Texas Tech, the softball team will play against Sam Houston State University in Abilene on Friday and Saturday for a three-game Southland Conference series.