Softball improves conference record to 12-6 with wins against SFA

By Abbey Bowling
Posted on April 17, 2016 | Sports | Comments Off on Softball improves conference record to 12-6 with wins against SFA 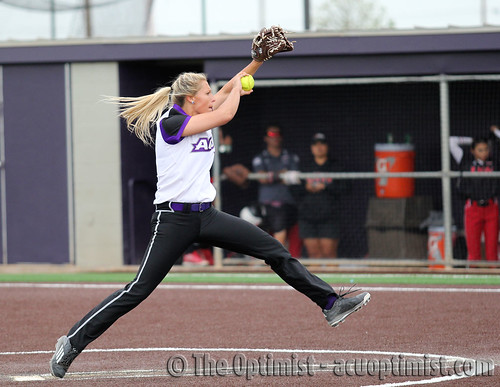 The softball team won two and lost one game against Stephen F. Austin University in Nacogdoches this weekend, improving their overall record to 18-18 and their conference record to 12-6.

The first game ended in a 5-1 loss for the Wildcats, with ACU’s only run coming in the third inning when freshman Brianna Barnhill doubled to center and freshman Holly Neese managed to score. Redshirt sophomore Hannah Null started the game and put in 4.0-innings of work and allowed three runs on two hits and gave up five walks and struck out two. Junior Julia Montoya relieved her in the fifth and pitched a total of 2.0-innings, giving up two runs on one hit, one walk and one strikeout.

ACU won the second game, 7-6, and started the scoring in the first inning when Neese hit a sacrifice bunt to allow sophomore Taylor Brown to score. SFA came back in first and second to score three runs to take the lead, before freshman Baylee Travers hit an RBI double in the fourth to make the score 3-2.

Barnhill smashed a three-run homer in the fifth, making the score 5-3, before freshman Miranda Herron managed to score on a throwing error to give the Wildcats a solid 6-3 lead. SFA tied things up in the seventh and forced the game into extra innings until Brown hit the game winning RBI single to allow Travers score, making the final score 7-6.

Brown made ACU softball history by getting six hits in a single game. She finished the game 6-for-6 with two runs and one RBI.

The final game on Saturday ended in a 6-1 win. Null pitched a complete 7.0-inning game and only gave up one run, along with five hits and five strikeouts. Senior Cara Hoover started the scoring in the first with a two-run homer to center field. Sophomore Peyton Hedrick also hit a two-run home run in the third, bringing the score to 4-1. Senior Demi McNulty scored in the seventh on a passed ball, and Neese scored the final RBI on a ground out in the seventh, making the final score 6-1.

ACU was scheduled to face Hardin-Simmons in a non-conference doubleheader last Tuesday, April 12, but lost the game due to rain.

The Wildcats will face Texas Tech in a non-conference game on Tuesday in Lubbock, before coming back to Abilene to take on Sam Houston State University in a three-game Southland series.