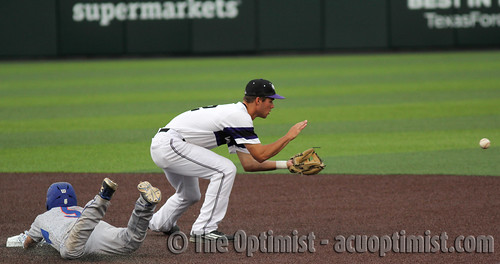 The Wildcats have relied on the starting pitching of three seniors to help lead them through a tough Southland Conference slate. In a much-needed home win against Houston Baptist, they got just that.

Senior Aaron Mason recorded his first career complete game shutout, ACU’s second of the season as a a team, in the Wildcats’ 9-0 win Saturday night. Mason allowed four scattered hits and struck out six batters while walking none in his best outing as a Wildcat.

“I was able to throw a lot of pitches for strikes and rely on my defense tonight,” Mason said. “It’s really nice to have a defense behind you that you can rely on. Flat out, I could throw the ball right down the middle of the plate and I knew the defense would make a play.”

The win snaps ACU’s four-game losing streak and gives them a chance to take the series win Sunday afternoon. The Wildcats move to 3-8 in conference and 11-18 overall. The Huskies move to .500 on the year at 15-15 and a game above even in league play, 6-5.

The pitching for the Wildcats  has improved since their last series. The Lamar Cardinals thrashed ACU for 31 runs on 44 hits over three games at the Crutch in their last series. In game one against HBU, senior Garrett deMeyere took a hard-luck loss after allowing three runs on six hits in 7.0 innings of action, while receiving little run support.

The bats came alive for ACU in game two, compiling nine runs on 15 hits. The Wildcats grabbed an early 1-0 lead in the second inning. Freshman shortstop Mark Pearson drove in a run on an RBI-single after senior catcher Alex Copeland and junior designated hitter Alex Check led off the inning with back-to-back base hits.

The Wildcats broke the game open in the fifth and sixth innings, combining for six runs on seven hits to make it 7-0 ACU. Three-straight base hits loaded the bases for ACU with one out in the bottom of the fifth. Junior Braxton Wilks, who leads ACU in runs batted in, drove in two with a single to right field.

ACU scored three more runs in the following inning primarily on HBU mistakes. The Huskies brought in reliever Brody Toal with runners on the corners and no outs. With his first pitch, the ball skipped past the Huskies catcher and allowed Pearson to score from third. Toal struck out a pair of Wildcats, but junior third baseman Russell Crippen came through by reaching first on a throwing error by shortstop Louie Payetta that pulled the first baseman off the bag and allowed the ball to sail past the bag into foul ground. Both runners would score from second and third base to make it 7-0 Wildcats.

Mason continued to be a dominating force on the mound no matter what the scoreboard read. He retired the first six men he faced before giving up a triple in the top of the third. The Huskies tried to get the run home with a squeeze bunt, but the ball came right back to Mason perfectly for the throw to home plate forcing Copeland to make the easy tag. HBU lead off the next inning with an extra base hit, but Mason would strand the runner with two fly outs to freshman Hunter Markwardt in center field and a ground out to second base.

Markwardt and Pearson were huge catalyst for ACU in this one. The two combined to go 6-for-7 while driving in three runs with two extra base hits and a steal. Markwardt drove in the final two runs for ACU with a two-run triple to right center field to bring home Pearson and Check in the seventh inning. Markwardt has gone 3-for-4 in both games against HBU, while swapping four bags in the past two days.

Pearson, on top of making several tough plays at short, lined a double down the third base line right before being brought in by Markwardt.

“They’re two freshmen that are continuing to grow, imagine what they’re going to be like in two years,” head coach Britt Bonneau said. “Markwardt’s doing a great job lately of using his bat and doing what he does best which is laying down bunts and giving us speed. Pearson’s been great for us defensively all year. When you’re a freshman playing Div. I ball, there’s a lot going on. But they’ve settled in really nicely for us and we like them.”

The defensive play of the game came from junior second baseman Aaron Draper in the sixth inning. After extending the inning on an error by Crippen with two outs, it seemed like HBU would put on another base runner. The Huskies hit the ball towards second base and Draper went to the edge of his range to snag the ball. He made the difficult back-of-the-glove grab to field the ball and then threw a bullet to Wilks at first base to end the inning with style.

Originally scheduled for a two p.m. first pitch, the game was pushed back to six p.m. due to rainy conditions throughout most of the afternoon. With the new turf at Crutcher Scott Field, the game was still able to be played.

“It was my first game under the lights so I was excited about that,” Mason said. “It is what it is, you take what God gives you. He gave us rain, so he gives you lemons, you make lemonade.”

The Wildcats and Huskies will finish off their series Sunday afternoon at one p.m.