‘He was just Max’: An evening with Max Lucado

By Mercedez Hernandez
Posted on April 27, 2016 | Features,News,Showcase | Comments Off on ‘He was just Max’: An evening with Max Lucado 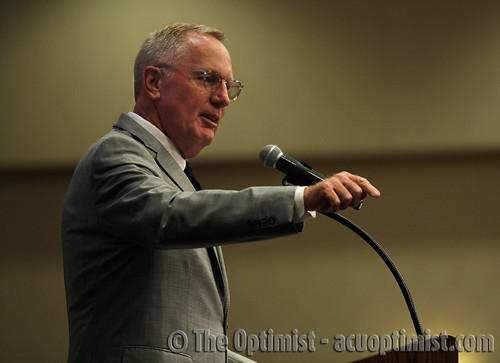 When Max Lucado arrived on campus as a wide-eyed, longhaired teen in the early 1970s, he never imagined he’d be a best-selling author. Ninety million sold copies later, Lucado spoke to an audience of mentors, friends and admirers at the university that introduced him to his faith.

On Monday evening, Lucado was honored at the 50th anniversary dinner of the Friends of ACU Library during which he was awarded the 2016 Friend of the Year award and was presented with a key to the city by Mayor Norm Archibald.

Mr. Lucado spoke to JMC students Tuesday morning, talking about the joys and struggles of writing. (Photo by Elijah Evans)

The dinner was different than years past because it served as a fundraising benefit for the archives department of the Brown Library. In June 2015, Lucado donated about 80 boxes of personal letters, manuscripts, fan letters and multimedia recordings to the archives. Tickets and tables to the dinner were sold to raise money for the cost of processing Lucado’s donation.

Dr. Carisse Berryhill, associate dean for digital initiatives, special collections and university archives, has been working alongside other staff members and student workers to process Lucado’s entire donation. She estimated the total processing cost to be about $10,000-$20,000, all of which was raised by the sold-out event.

Emily Wright, junior English education major from Richardson, is a student worker in the archives and has been organizing the collection since October.

“As an English major, it’s pretty cool to get inside the mind of a pretty famous Christian author,” Wright said. “What’s been the coolest thing for me to see was the fan mail from the general public who really trust Max Lucado with their life’s story. They really showed me the influence he had in their lives.”

The dinner opened with a prayer from Dr. John T. Willis, Burton Coffman chair of biblical studies and professor of Old Testament, and kind words from Lucado’s mentors and Friends of ACU Library board members, including Berryhill.

“Seeing this collection come to ACU has been an honor and highlight of my career, and I’m excited to see how it inspires the university and its community for generations to come,” Berryhill said as she opened the floor for the night’s speeches.

During his introduction of Lucado, Dr. Phil Schubert, president of the university, said the unprecedented collection will be an asset for the university and he looks forward to the years to come of people being inspired from what Lucado has accomplished.

“We’ve never had an ACU alumnus who’s achieved the success and broad visibility and impact that Max has,” Schubert said. “Getting the custody of his collection and having that indefinitely is a reminder of the amazing things that God can do in our journey.”

Mrs. Lucado smiles up at her husband as he speaks at Monday’s dinner. (Photo by Lydia Lawson)

At the event, Lucado delivered a speech about his journey from being an ACU rebel to a best-selling author. He recounted how he first came to campus in 1973 as someone who did not particularly have a mind for Christ. He said he struggled with leading what seemed like two separate lives. In one life, he was a model student, but in the other he battled “wickedness” and spent a lot of time with a drink in his hand instead of a Bible. But, as Lucado attended his first university Bible class, taught by Professor Emeritus Dr. Carl Brecheen, he said he was shown how the Lord was not meant for only the most pristine of followers.

“I perched myself as far back in the corner of that class as I possibly could, with my long red hair and mandatory purchased Harper Study Bible,” Lucado said. “Dr. Brecheen began to describe Jesus. He told me about a Jesus I had never seen, a Jesus who came for sinners like me.”

Since that first Bible class, Lucado has become a powerful voice in the world of Christian literature. Although he has massive amounts of fame, he has never forgotten the roots he planted in Abilene and those who helped lead him to the success he has today.

“It’s a joy to see so many people be in a place that changed my life,” Lucado said. “The greatest honor tonight was the opportunity to say thank you to people like Dr. Carl Brecheen, Dr. Paul Faulkner and Dr. John Willis, because their influence is just right at the heart of my life.”

Lucado also thanked Berryhill and other staff members and student workers who’ve had a part in organizing his collection.

Lucado’s collection is still being organized, but most likely will be on display within the next year.

Posted by Mercedez Hernandez on Apr 27th, 2016 and filed under Features, News, Showcase. You can follow any responses to this entry through the RSS 2.0. Both comments and pings are currently closed.  - This post has been viewed 7951 times.
Related Posts:
» Max Lucado steps down as senior minister at Oak Hill Church for health issues - 04/4/2007
» ‘ACU’s most recognized alumnus’: Best-selling author Lucado named 47th Outstanding Alumnus - 02/22/2004