By Jonathan Raitz
Posted on April 24, 2016 | News,Showcase | Comments Off on Benefit run attracts 140 runners despite half marathon cancellation 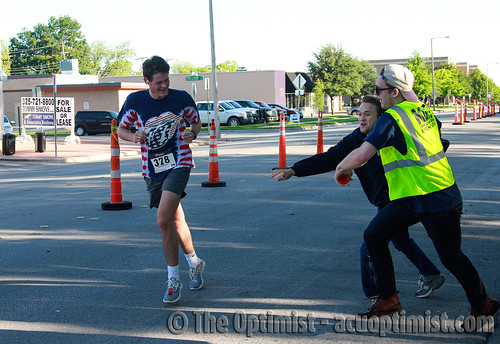 One hundred and forty participants lined up across from the ACU police station Saturday morning to take part in the 33rd annual Kirk Goodwin Run.

The event hosted by the men’s social club Galaxy, was first started in 1983 in honor of Kirk Goodwin, a member of the 1983 Galaxy pledge class who passed away in a fatal car accident. Since then, the run has raised over $200,000 to help community members with outstanding medical needs.

This year, Caleb O’Neal, one of the event’s coordinators said the event raised roughly $16,000 to help support McKenzie Fleming, a 13-year-old who has been battling cancer the majority of her life. The run also honored recent ACU grad, Cason Ford, who was diagnosed with leukemia in the fall.

Despite having to cancel the half marathon portion of the event a few weeks ago due to road construction, O’Neal said the event went extremely well.

“Overall, it changed the race in a way that made it more beneficial to the family who is receiving the funds, because we didn’t have to pay the expenses on the half marathon, which would have surpassed the amount of registrations we had for the half marathon,” said O’Neal the junior AD/PR major from Burleson.

The finishing times of the 5K ranged from just over 17 minutes to just under one hour, with the last participants crossing right around the 58 minute mark. Sophomore accounting major from Atlanta, Texas, John Baker was the first to cross the finish line.

Baker, who redshirted this year as a member of the ACU track team, said running in these events is much less stressful than his other races.

“There’s not nearly as much pressure, it’s easier just to come out and have fun and enjoy yourself,” Baker said.

Baker also said if his track schedule permits him to, he will more than likely participate in the KGR again next year.

Finishing behind Baker was junior youth and family ministry major Conner Mills, who said he wanted to see how long he could keep up with the ACU runner.

“It was fun. I actually won it my freshman year, but John kept me from repeating,” Mills said.

Tanner Ernhart, a sophomore nursing major from Kaufman, said she is training for a half marathon, but decided at the last minute to run anyway.