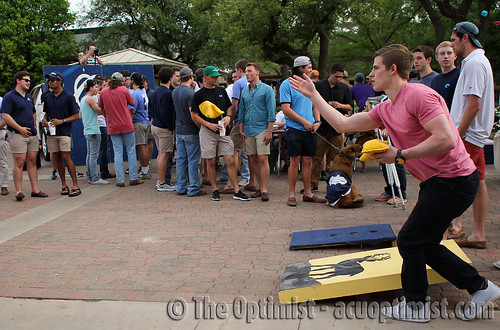 With more than 300 students already registered to pledge next fall, the stage is set for a large turnout at Thursday’s All-Club Rush.

Trojans president Chris Kirklin said All-Club Rush signifies the beginning of the rest of the process to come.

“All-Club Rush helped narrow my decision down,” said Kirklin, a junior accounting major from Richardson. “I was easily able to visit all Men’s Clubs and get a better perspective of which clubs I specifically wanted to rush and could see myself being a part of.”

Kirklin also said the addition of spring pledging earlier this semester won’t change landscape of the event in the slightest, because “rushees” are coming in with an open mind.

“Trojans have been preparing for a while now,” Kirklin said. “Organizing what we will be doing at the rush, hyping up our club about meeting new guys, and anticipating for the rushing season to begin!”

All 11 clubs active this semester will participate in the rush. Sub T-16 is under suspension but may accept pledges in the fall, Jackson said.

Jackson said he only made one request to change the event from last spring.

The event is set to run from 5-7 p.m. and each club will have a food or drink of some sort. As similar as the event remains from year to year, Jackson said All-Club Rush gives students considering pledging a chance to meet members and for the clubs to showcase themselves.

“It’s really about them [clubs] starting to sell themselves,” Jackson said. “The spring is so much more about the club trying to almost woo the prospective students, and the fall is more about the student trying to woo the club.”

“Some people go into it just gung-ho for one club and they will pledge another club in the fall,” said Ross, a junior interior design major from Lubbock. “And that’s just all about going to as many rushes as you can and that’s how you really figure out the personality of the club.”

After this week, each club will be allowed two more rushes this semester and three when school resumes in the fall. Pledging registration will also remain open until September.

Posted by Jonathan Raitz on Apr 6th, 2016 and filed under News, Showcase. You can follow any responses to this entry through the RSS 2.0. Both comments and pings are currently closed.  - This post has been viewed 727 times.