By Optimist Editorial Board
Posted on April 14, 2016 | Editorials,Opinion,Sports | Comments Off on ACU Athletics lacks transparency needed for Div. I reputation 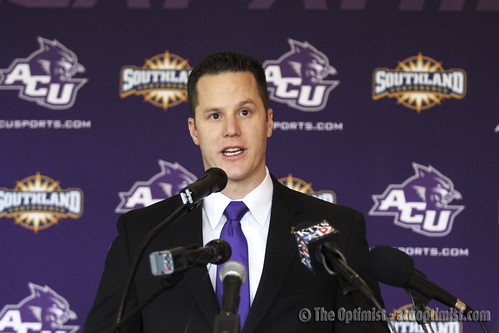 A lot of students, faculty and alumni had an opinion when they found out head track and field and cross country coach Keith Barnier was relieved of duties and would not return after three years with the university. Some thought it was a justified move. Others thought it was madness.

Based on our responsibility as media to function as watchdogs, the Optimist reported the decision, and one of our reporters offered her opinion in the form of a column.

Our reporting – and, more specifically, our column – met mixed reviews. The usual “biased writing” and “poor taste” comments filled our Facebook and Twitter feeds for much of this past week.

Unfortunately, though, that reaction has taken attention away from the real issue – the lack of information being shared with the public about the immediate release of Barnier and other such decisions made in the Department of Athletics.

Talking off the record, many individuals closest to the situation said they believed Barnier’s release wasn’t that big of a surprise. What they saw and heard led them to realize that his time with ACU was running out. But upon making the announcement, ACU athletics offered no real explanation why, of all the coaches and assistants on staff, the university chose to release the one who brought the first Southland Conference Championship to Abilene less than six months ago.

Director of Athletics Lee De León and the department would not comment on the situation or offer an explanation for the withholding of information.

And that’s where the real issue lies.

If Barnier was legitimately giving the department a reason to separate itself from him, that information should be released to the public. Wildcat fans and alumni, especially those connected to the program, should know why Barnier was relieved of duty.

The athletic department made this explicit within the press release, stating “Neither De León nor anyone associated with ACU athletics will have any further comment on the situation until a new coach is named.”

It’s not the first time ACU Sports has withheld information since the Div. I move. When men’s basketball lost several athletes because of misdemeanors last year, athletics said nothing. When a football athlete was released because of a domestic violence issue two years ago, athletics made no announcement of its own to the public. The pattern has remained the same.

De León and rest of the department deserves some credit. They have received a lot of anger for the decision and, more specifically, the lack of explanation. But through it all, athletics has appeared to stick to a behind-closed-doors mentality.

We’d just like to see more answers for the public.

Posted by Optimist Editorial Board on Apr 14th, 2016 and filed under Editorials, Opinion, Sports. You can follow any responses to this entry through the RSS 2.0. Both comments and pings are currently closed.  - This post has been viewed 2712 times.