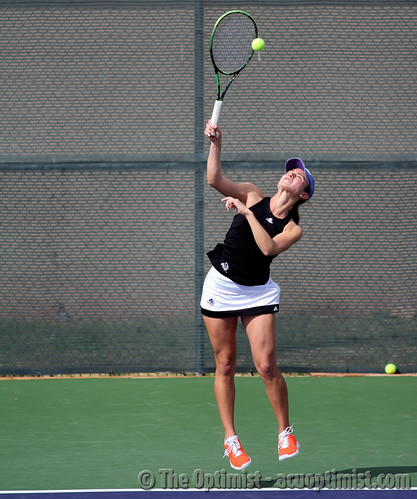 The ACU women’s tennis team brought in the McNeese State Cowboys to Abilene to face them in their fourth conference match up. The women came out successful as they were able to pick up the victory by a score of 5-2.

This now gives the Wildcats a 3-1 conference record.

In singles, the Wildcats were impressive as they got four victories, with one of these matches including a thriller from sophomore Whitney Williams. She had lost her first set 6-3 and was down 5-2 in the second set, however, she was able to put together a furious comeback to win by a score of 3-6, 7-5, 6-2.

“We knew that McNeese was going to be a tough match, but we came out on top because of our toughness,” senior Hermsdorf said. “Through out our whole team we bring great athleticism and a tough mental state that allows us to win close matches. A win like this gives us some confidence heading into our next conference matches, but we know we need to stay focused to get the job done.”

In doubles, the women were even more impressive as they pulled out a sweep winning two out of two matches played.

“It feels great to get this conference victory, I’ve had a lot of close matches that haven’t gone my way so it was nice to get this one,” junior Walker said. “Looking to the future I just expect all of the matches to be tough and hopefully I can continue to come out on top.”

The women’s next match will be here in Abilene as they take Northwestern State University. The match will be Wednesday, March 30th and will begin at 4 P.M.