By Max Preston
Posted on March 15, 2016 | Sports | Comments Off on Wildcats’ tennis get team victories 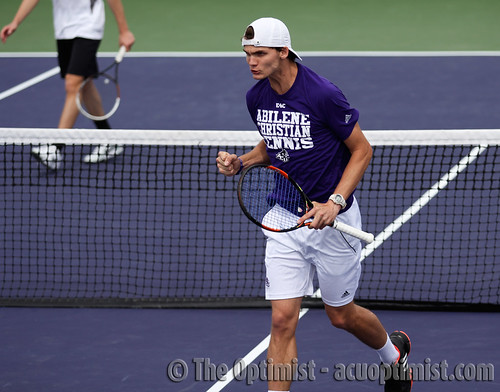 This weekend, the men and women’s tennis teams were active in two different locations. The men traveled to Mississippi where they matched up with the University of Southern Mississippi and lost 4-0, but also faced Jackson State University and won 6-1.

The women stayed in Abilene again this weekend to face Stephen F. Austin for the first conference match up and won in a close 4-3 match. They also had a scheduled dual against Northwestern State University, but it was postponed due to rain.

The women were put to the test in singles against SFA where they split the matches three victories out of six. The three wins came from senior Nada Marjanovic, winning her match by a score 6-3, 3-6, 6-2, Lucile Pothier, winning 6-0, 6-1, and sophomore Whitney Williams, 1-6, 7-5, 6-2.

In doubles, the women were impressive, sweeping Stephen F. Austin in three matches. The teams included Williams/Erin Walker, who won their match 6-3, Kaysie Hermsdorf/Pothier, who won 6-3, and Marjanovic/Andrea Crook, who also won 6-3.

In singles for the men, the Wildcats didn’t perform well against Southern Mississippi as they came away with four losses and two unfinished matches. However, they performed well against Jackson State getting five wins out of the six matches they played.

“I thought we struggled a little bit in the first match because of how humid it was here, but we pulled out a solid win during the afternoon,” Sheehy said. “It’s nice to have a few days off now before our next matches especially since it’s during spring break.”