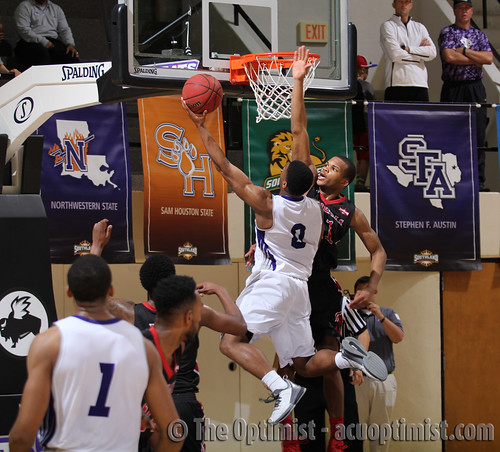 The Wildcats battled back from a 17-point deficit in the second half, but couldn’t find the final push for the win against rival Incarnate Word. ACU fell 74-70 to move to 13-17 and 8-9 in the Southland Conference. The Cardinals improve to 16-12 overall and 11-6 in league play.

The Wildcats, who have done an impressive job protecting home court this season, move to 10-3 at home and suffer their first loss at Moody Coliseum during conference play.

ACU was fresh off their 87-84 last-second win and was looking for the same late game magic in this one. Incarnate Word opened up their lead to 17 after hitting a three ball to make it 52-35 with 13:22 left in the second half. The Wildcats put together a 16-7 run to make it 59-51 UIW with over six minutes left in the game.

Freshman Jaylen Franklin scored on a pair of layups, seniors Austin Cooke and Parker Wentz nailed a three-pointer each and freshman Jaren Lewis scored four points to cut the lead to a manageable eight points.

With 3:22 left in the game, senior forward Kyle Hittle hit a three to make it 66-57 and had the Cardinals feeling confident for the win. However, junior Jovan Crnic converted a jumper and drew the foul for the three-point play. On the next ACU possession, Cooke hit another shot from deep to make it 66-63 with under two minutes to go.

The Wildcats were never able to get closer than that, even with a deep ball from Lewis and fast break layups from Franklin, the Cardinals made their free throws down the stretch to secure the win.

“I thought our guys did a good job of battling and we got two good looks at the end, but it just didn’t happen,” head coach Joe Golding said. “They came out of halftime on a huge run and it made it tough for us because we were forced to play catch up the entire half.”

The game was highly emotional, as both players and coaches from the ACU bench became frustrated with calls, especially in the second half. Golding was called for a technical foul with 11:56 in the second half, which lit a fire for the Wildcats, as they put together a 14-5 run to get back in the game. The Wildcats were whistled for yet another technical foul late in the game on the bench after a non-call on what appeared to be an over-the-back foul on Incarnate Word with ACU trailing by four with seconds remaining.

“You know I’m always going to stick up for my guys,” Golding said. “I don’t want the players getting techs but I’m not afraid to defend them especially when I feel like we’re getting the short end of the stick. It was a competitive game with a lot of emotions and I thought some calls should have gone our way that didn’t.”

Lewis led ACU with a career-high 22 points and a near double-double with nine rebounds. He was 9-14 from the field and added three blocks, tying his career-high.

Franklin dropped in 17 points, eight rebounds and four assists as the only other Wildcat in double-figures. Cooke came up with big shots for ACU, converting 3-6 three-pointers for nine points. As a team, the Wildcats shot 47 percent, compared to the Cardinals 39 percent. Incarnate Word was held to 33 percent shooting in the second half, after shooting 44 percent before halftime.

For the Cardinals, Hittle finished with 28 points and seven rebounds. He made nine of 17 shots and an impressive 5-9 from beyond the arc. Incarnate Word was led by a trio of Hittle, junior forward Derail Green and sophomore point guard Jontrell Walker. Green added 13 points on four rebounds, while Walker dropped in 22 points primarily from the charity stripe, going 12-14, mainly in the final minutes.

The first half was a defensive showcase for both sides. The Wildcats led 15-14 after exchanging threes from both sides. Lewis began to take over in the final minutes of the half, scoring six of ACU’s final 10 points on two layups and a jump shot. Hittle hit a three to make it 33-30 with a minute to go and Franklin hit a pair of free throws to make the score 34-32 UIW at the break.