Wildcats can’t close out against Islanders on senior day

By Daniel Zepeda
Posted on March 6, 2016 | Sports | Comments Off on Wildcats can’t close out against Islanders on senior day 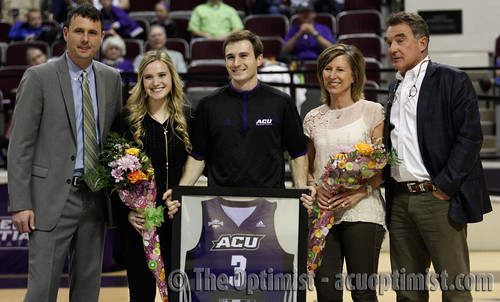 The Wildcats led for the entire game up until the 6:56 mark in the second half against the second-best team in the Southland Conference. From that point, the Texas A&M-Corpus Christi Islanders would rely on their core group of seniors to lead them to victory and end ACU’s season with a 74-69 loss at Moody Coliseum.

The Islanders, who already locked up the number two seed for the Southland Conference postseason tournament, finish a terrific season at 24-6 overall and 15-3 in conference.

For the second time in the last four games, ACU not only challenged one of the premier teams in the conference, but led for a majority throughout the game. In their previous meeting in Corpus Christi, the Wildcats led 33-26 at halftime and did not relinquish the lead until the mid point of the second half. In Saturday’s game, the Wildcats led 38-34 at the break and held onto the lead until the lead, 59-58, with just less than six minutes to play.

“I thought we did a great job moving the ball in the first half,” head coach Joe Golding said. “We were moving and executing what we wanted to do. I didn’t see that as much in the second half, we got a little sloppy and made some made decisions that led to turnovers.”

The Islanders, one of the best defensive teams in the nation, held ACU to 33 percent shooting  in the second half after allowing the Wildcats to shoot 58 percent in the first half. The Wildcats came out of halftime with a 16-8 run to push the lead to 12, 54-42, with 10:37 to go after a layup inside from freshman Hayden Farquar. The Islanders cut the lead to five after a made three-pointer and a layup made it 54-49 with 8:30 to go.

Ali scored 22 of his 29 points in the second half, including a stretch were he scored 13 of 19 points for the Islanders over the course of six minutes. Ali made it a two-point game after making the layup and drawing the foul to cap off an Islander 10-0 run. Ali hit back-to-back jumpers to tie the game at 56 with under seven minutes to go. Ali finished with six rebounds, three assists and converting 16 of 17 free throw attempts.

Free throws, which has been something ACU has struggled with most of the season, were again an issue for the Wildcats. The team went 12-24 from the line and missed at crucial moments in the game. Over the final four minutes, ACU missed four of eight attempts in what was mostly a single-possession game down the stretch. The Islanders went 28-36 from the charity stripe and converted their attempts down the stretch when ACU was forced to foul.

Freshman Jaylen Franklin finished with 14 points, but struggled shooting, going 3-8 from the field and 7-13 from the free throw line. Franklin finishes his freshman season as the Wildcats leading scorer (16.2), first in steals per game (1.7) and second in field goal percentage (51 percent) and as the top choice for Southland Conference Freshman of the Year.

In their final game at Moody Coliseum, seniors Austin Cooke, Jalen Little, Duran Porter and Parker Wentz combined for 29 points on 11-26 shooting. Cooke poured in 14 points and was lethal from deep, going 4-5 from beyond the arc. Wentz, who became ACU men’s basketball’s only player to ever play in every game over four years, finished his distinguished career with five points and a three.

“They’re great kids, great individuals,” Golding said. “Parker Wentz should be on the cover of every ACU publication for the next 30 years. He’s exactly what this program and ACU stands for and what we want every athlete who wears purple and white to embody.”

The Islanders were led by the 29-point effort from Ali. Senior forward Bryce Douvier finished with a double-double of 18 points and 11 rebounds. Junior forward Rashawn Thomas, a candidate for the Southland Conference Player of the Year Award, was held in check by ACU. Thomas scored 11 points and grabbed just three rebounds, after averaging 16.9 points and 8.1 rebounds for the season. Thomas did make his mark on the defensive end, blocking five shots and grabbing a steal.