Tennis puts on a show at home

By Max Preston
Posted on March 6, 2016 | Sports | Comments Off on Tennis puts on a show at home 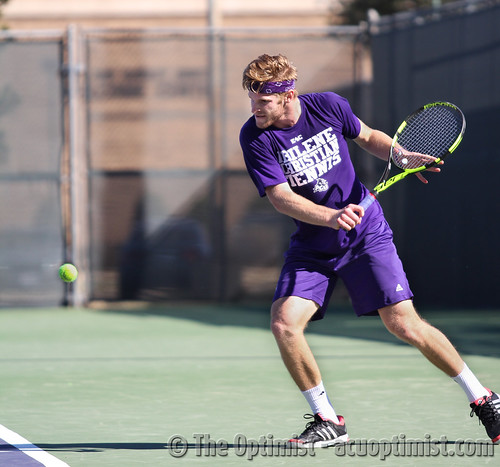 On Friday, the men and women’s tennis teams came out and got wins on their home court. Both teams faced McMurry University and Temple University from Pennsylvania. The women pulled out two victories over both teams with a 5-2 win over Temple and a 7-0 sweep over McMurry. The men won two as well with a 6-1 score against Temple and also a 7-0 sweep to McMurry as well.

In singles, the women secured four victories out of six matches with Temple and a complete sweep of six victories against McMurry. Each one of the women performed well as they contributed to at least one point towards their teams two impressive victories.

In doubles, the women took two doubles wins out of three over Temple and a sweep of three wins over McMurry. The teams included junior Erin Walker and sophomore Whitney Williams, sophomore Lucile Pothier and senior Kaysie Hermsdorf and senior Nada Marjanovic and sophomore Andrea Crook.

“We were happy with the way we performed,” said Marjanovic. “We went out there and had professional attitudes and were able to get the job done. We were all very focused and the home crowd was a big help. To have such great support and encouragement from them was a big advantage. Andrea and I had a really exciting doubles win and it was really fun with the crowd involved we really were able to get into it and feed off the energy to get the doubles clinch in the tiebreak.”

For the men, their singles performance was stellar as they only lost one singles match all day. The Wildcats won five matches out of six against Temple and swept McMurry with six wins out of six. Each of the men also had strong showings as everyone was able to contribute to the team victories as well.

In doubles, the men were perfect as they swept both Temple and McMurry three matches to none. The teams for the men were mixed up yesterday except for the team of senior Jason Proctor and sophomore Henry Adams.

“I think most people don’t know what college tennis is actually like but once they come to a match they realize it’s exciting and want to come back,” said freshman Josh Sheehy. “Even though the score may not have shown it, Temple was a close match and we had to work hard to close them out. Our goal is to keep climbing the rankings and we have to keep winning to achieve that.”