By Daniel Zepeda
Posted on March 4, 2016 | Features,Sports | Comments Off on Old Faithful: Cooke and Wentz remain through trying years 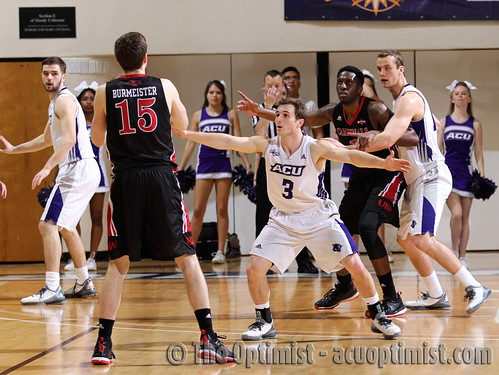 Seniors Austin Cooke and Parker Wentz have been through it all in their years at Abilene. As underclassmen, they produced at a high level as inexperienced players in a new conference. Now, the most tenured players for the Wildcats have spent much of the season teaching a talented freshmen class on what it means to play ACU basketball in what’s been the programs best season since the Div. I transfer.

“I want to be known as a hard-worker off and on the court, a leader by example and someone they [teammates] can talk to,” Wentz said. “Just kind of be the same guy through and through.”

In their first season as teammates, the Wildcats just made the transition to Div. I. In addition, the roster was filled with 12 new faces, as Wentz, the only Wildcat to be on the team the past four years, was one of two players to return. 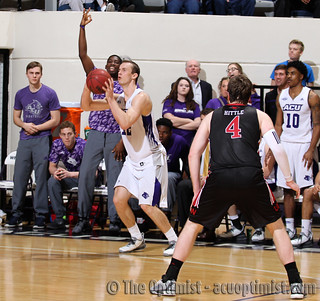 The Wildcats went 11-20 and 2-12 in the Southland, but Cooke and Wentz turned into key contributors. Cooke averaged 7.8 points and 5.7 rebounds per game, while Wentz led the team in scoring at 13.9 points and led the conference in three-point makes per game (2.9).

“If it was easy, everybody would be doing it,” Cooke said. “There was a game sophomore year against McNeese and it was a rough stretch and I remember chewing out Parker during the practice for some reason, just taking my frustration out on him. It’s really hard to deal with losing on that scale.”

In the 2014-2015 season, hopes were high. The team returned seven players and looked to gain ground in the conference.

ACU got out to a 3-0 conference start with a huge win over Northwestern State in Natchitoches, Louisiana. The Wildcats then suffered a 12-game losing streak while falling in 14 of their final 15 games of the 2014-2015 season.

The losing, unlike anything either Cooke or Wentz had experienced, took a toll. Even while becoming two of ACU’s top players (Cooke-10.6 points, 5.9 rebounds, 48 percent three-point shooting) (Wentz-10.3 points), they both wondered if things would ever get turned around.

“It’s a tough transition going from Div. II to Div. I and with that has come a lot of losing which is really hard to handle,” Wentz said. “A hard moment for me was when we played Corpus Christi in the last game of the year. It was a bad game, a lot of people didn’t want to be there anymore. I can point to that moment as definitely one of the hardest moments of my being at ACU.”

In his three seasons, Wentz had gone 33-55 as a Wildcat, and in two season, Cooke was 21-41. At the end of last season, both heavily contemplated if returning was in their best interest. They both decided however that going 1-15 was not how they were going to end their careers.

“For me, that motivated me because of how embarrassing that was,” Cooke said. “I don’t care who you are or what talent level you’re at, when you lose that many in a row and that’s all anyone is talking about, it’s really hard to deal with. But I didn’t want that to be my final legacy here. I wanted to continue the fight to change this team. I didn’t want to leave on the heels of a 12-game losing streak.”

Now seniors, Cooke and Wentz have helped transform ACU men’s basketball image from a doormat to a program capable of winning every night. 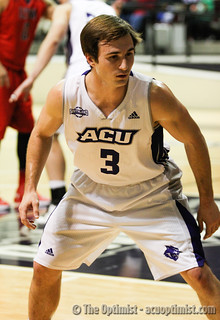 and at 13-6 and 8-8 in the Southland Conference, two wins more than their combined six conference wins from the previous two seasons. With the addition of several talented freshmen, along with Cooke and Wentz leading the way as the voices of experience, the Wildcats future looks brighter than ever.

“The biggest difference this year is that we’ve had more come back this season than we ever have before,” Wentz said. “We had guys come back this year compared to usually just me and Austin in the past. Another big factor was that with two years of Div. I experience, we now knew these Southland teams and how they played.”

Wentz has remained the Wildcats, and the conference’s, top three-point shooter, converting 46 percent of his shots from deep while averaging 8.8 points per game. Wentz also made history for ACU by playing in a program record 116th game on Feb. 23 against Texas A&M-Corpus Christi.

Cooke, who has taken on a new role, has been a spark off the bench after primarily starting the past two years. He has averaged 6.1 points and 3.6 rebounds, but scored 14 and 15 points in back-to-back games against Southeastern Louisiana and Corpus Christi in late February.

Whether playing all 40 minutes or coming in when called upon, Cooke just wants to help the Wildcats continue to win.

“I don’t have to have all the attention or score all the points, I’m just glad to get the wins,” Cooke said. “I can tell you though that I would much rather come off the bench for this team if that means we’re winning, than start and lose like we used to.”

For Wentz, the road to ACU started with a sit down with head coach Joe Golding. Wentz knew he wanted to play Div. I basketball, and while normally an easy-going guy, playing college basketball at the highest level was something he would not budge on.

“Playing Div. I was really important to me,” Wentz said. “I came here with the hope that ACU would move to Div. I and Golding told me that was going to happen. I thought it was a good fit.  It was close enough for my parents to come see me from Lubbock, and my older brother and best friend were here.”

In his sophomore  year, Wentz was joined by the Scottsdale, Arizona native Cooke, who did not have the easiest road to ACU. 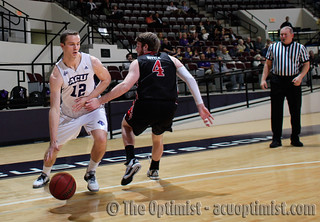 Cooke played at Desert Mountain High School and was heavily recruited by several schools late in his career. At 6-foot-7, he had the size and confidence to continue his career at the collegiate level, but others close to him did not share in his enthusiasm.

“My coach in high school told me that I wasn’t a good enough shooter,” Cooke said. “People would call asking about me and he would tell them ‘he’s not what you think’. I’ve heard it all: too slow, not athletic enough, doesn’t play defense. The only real things I had going for me was my height.”

After a year at Central Arizona Junior College, Cooke was desperate to make the next step. He figured that after helping lead the Vaqueros to a 30-5 record, he would get a couple of offers from Div. I schools. But that wasn’t the case.

“I started flipping through my phone at home looking for any kind of connection for somewhere to play,” Cooke said. “I’m scrolling and I see coach Tanner, who I had met but really forgotten about. I saw he had left SFA, and I texted him and he invited me to come visit ACU. One thing led to another and before I knew it, I was getting to play Div. I ball in Abilene.”

ALWAYS BACK FOR MORE

Athletes are some of the most incredibly competitive individuals on the planet. No matter what level of competition, all athletes want to win. The same goes for Cooke and Wentz. The two of them didn’t enjo 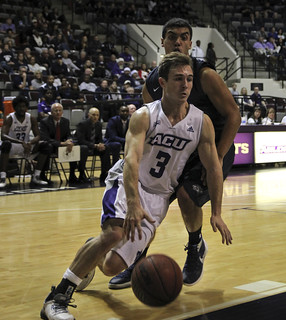 But they did it anyway.

The two of them have been around for the last three to four years, arguably the most challenging years of ACU men’s basketball’s history. While the team has averaged just five returners and 10 new faces over the last four years, Cooke and Wentz chose to fight to make their program better.

“I always liked the prospect of coming into a program that was lower-level and being able to build it up to a higher-level over my time here,” Cooke said. “To leave it in a better place than when I got here. I think this program is in a good place for these freshmen and it’s going to be really exciting to see where they elevate it to during their time here.”