Men and Women’s Tennis to play in Abilene

By Max Preston
Posted on March 3, 2016 | Sports | Comments Off on Men and Women’s Tennis to play in Abilene 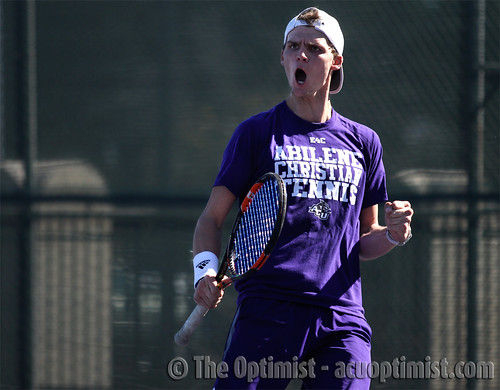 The men’s and women’s tennis teams will play in Abilene Friday to face Temple University and McMurry University in the same day. For the men, it will be their first home matches since the middle of February, while the women have not played in Abilene since Feb. 3 and is only the second time they’ve played at home this year.

The women are coming off a great performance two weeks ago that included a 5-2 team victory over New Mexico State University and a 4-3 victory over the University of Texas-El Paso. The Wildcats also had a bye week the previous weekend and will get to come off the break by playing in Abilene.

ACU will have tough competition against Temple University, as they are currently 5-2 with one of those losses coming from a competitive Cincinnati University. McMurry University has also competed well this season, putting up a 4-3 record.

The women hope to improve to 9-4 tomorrow and also try to move to a 3-0 home record.

“It is always amazing to play at ACU,” sophomore Lucile Pothier said. “We need support. We had a good week of practice and have worked hard to be ready for this double header.”

The men will also match up against Temple University and McMurry University. Temple has an 11-2 record and will be tough for the Wildcats, as well as McMurry with a 5-2 record heading into tomorrow.

The men look to improve to 12-5 to put their winning percentage above .700.

“I am super excited to play at home again in front of the great ACU Tennis fans,” senior Marco Bensley said. “They have shown great support, and I think with the free Dr.Pepper and hot dogs this weekend we will get more fans out. We have prepared well to take on the men from Temple, we have built a great season so far and we are excited to see how far we can go and how well we will do. Being the first team in ACU to be ranked in Div. I, we take great pride in showing that we are worthy of being ranked.”