Men and Women’s tennis split up for the weekend

By Max Preston
Posted on March 11, 2016 | Sports | Comments Off on Men and Women’s tennis split up for the weekend 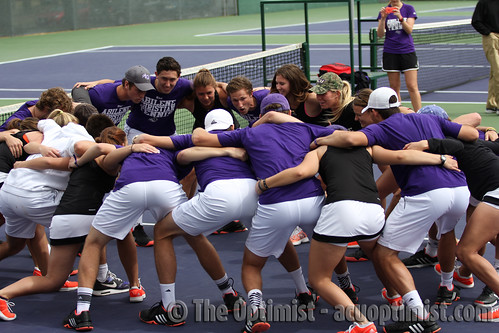 This weekend, the men and women’s tennis teams will split up and play in different locations. The women will get to stay in Abilene to take on conference rivals Stephen F. Austin and Northwestern State University while the men travel to Hattiesburg, Mississippi to face the University of Southern Mississippi and Jackson State University.

The women’s team is coming off an impressive weekend getting two team victories including a 5-2 win over Temple University and a 7-0 sweep over McMurry University. The women picked up these wins in Abilene the past weekend and will get another chance to come out and perform well in front of the home crowd.

“It is going to feel great playing in Abilene again, especially since we are on the road quite a bit,” senior Kaysie Hermsdorf said. “These two matches this weekend are really big matches for us. We had trouble with them last year but this year we are all pumped and ready to get them out on the court. We have had really good, intense practices this week preparing us for the teams this weekend. We are all ready and capable of playing great tennis this weekend. Getting these matches would prospectively put us in the top of our conference. We are looking forward to some great competition this weekend.”

The men are coming off of an impressive weekend in Abilene as well picking up two team wins including a 6-1 victory over Temple University and a 7-0 sweep over McMurry. The men will be taking a lengthy trip to Mississippi as it will be one of the longest trips they have had to take all year. ACU will face the University of Southern Mississippi, who has a 9-7 record overall, and Jackson State University, who has a 3-7 record overall.

“I think we are very ready for the long road trip matches,”freshman Sebastian Langdon said. “We put in tons of time with fitness, weight room, and on the court and I believe our confidence levels are extremely high after our hard work. It should be a super fun trip and we plan on bringing back some wins.”

The women will begin play on Saturday against Stephen F. Austin at 1 P.M. And will face Northwestern State at 12 P.M. On Sunday. The men will begin their play on Sunday at 10 A.M. against Southern Mississippi and will play against Jackson State at 4 P.M.