By Derek Marcelain
Posted on February 11, 2016 | Features,Sports | Comments Off on Softball seniors prepare for final season as Wildcats 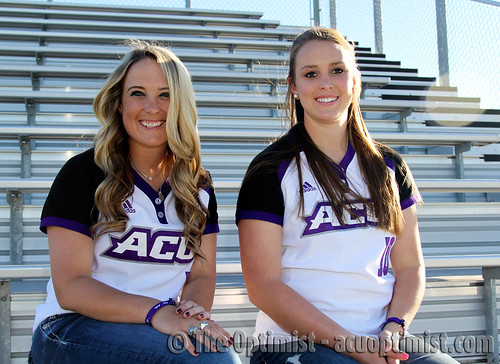 Having seniority on a team is a special feeling. It’s a unique culmination of years of hard work and dedication leading up to one last season to make everything count. The leadership and dominance can sometimes lead to a sense of entitlement, but that’s not the case for two ACU softball seniors.

“It’s not about automatically demanding respect, it’s about being the leader your team needs and one that you owe to yourself to be,” senior Demi McNulty said. “I see myself as a bridge from the Lone Star Conference to the Southland Conference. I’ve seen this team go through a lot, so I feel like I have a lot to offer the new girls on the team.”

McNulty, from Hurst, and fellow senior Cara Hoover are the only seniors who have been here for the last three years. They’ve seen ACU softball undergo major changes, including changing from the Lone Star to the Southland Conference, moving up from Div. II to Div. I and seeing the Poly Wells Softball field go to turf along with other renovations.

“Cara and I have been here since our freshman year and when we were recruited, we were told that ACU would most likely be transitioning into Div. I within the next couple of years,” McNulty said. “It has been a really cool opportunity that we have been able to go through that transition.”

When the two were recruited in 2011-2012, Bobby Reeves had just come off his second season as head coach of the Wildcats. Reeves was able to offer the girls scholarships, something that was rare at the the time.

“It certainly has been a blessing to have been one of the first people that he recruited and gave a scholarship to come play here at ACU,” Hoover said. “It is just really cool to be here for four years. Being part of the Div. I transfer was just awesome, because I know that we all dreamed of going and playing Div. I when we were younger, but it wasn’t always an option that was going to happen. It was just a really cool experience.”

The future of ACU softball seems very bright. Three Wildcats, two sophomores and a junior, were selected as Preseason All-Southland Conference First-Team. Both seniors are happy to see what the program has in store.

“We have some high goals for this team, this is definitely the best team that I have been on since I have been here,” Hoover said. “Hands down the chemistry, athleticism, just really with everything. So we see ourselves as conference champs for sure and I think that is very obtainable.”

With one season left, it’s always difficult to have to move on from the game you’ve put so much time in. McNulty and Hoover plan on enjoying every moment and taking in all they can.

“We all have been playing softball since we could walk and so it is a really cool experience to be at the end stages and to look back and see all the work that you did is finally coming together and the journey we have had,” Hoover said.