Second half run propels Islanders past Wildcats in tight game

By Daniel Zepeda
Posted on February 23, 2016 | Sports | Comments Off on Second half run propels Islanders past Wildcats in tight game 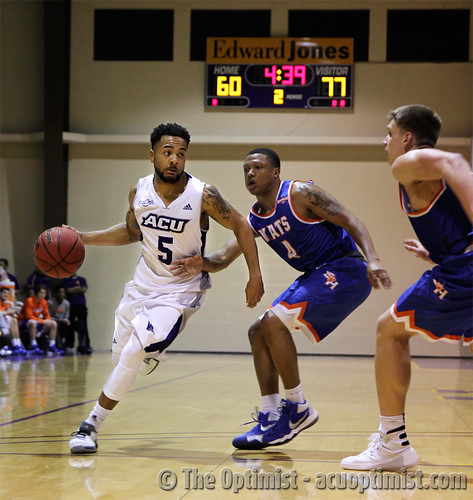 In one of their best games of the season, the Wildcats not only kept up with, but led for a majority of the game against the second-placed Texas A&M-Corpus Christi Islanders. An 18-6 second half run by the Islanders pushed them ahead of the Wildcats and secured a close 65-59 win over ACU.

The game was a close one for much of the contest, with eight lead changes, three ties and the largest lead of the game coming from ACU at an 11-point lead near the end of the first half. The true difference maker came from the Islanders putting up 10 more shots (26-56) in the game than ACU (21-46) thanks to 17 Wildcat turnovers.

For ACU to win the game, it would have had to have a lot of things go right. Those things did go right for the Wildcats for much of the night. Thanks to hot shooting, the Wildcats jumped out to an 18-9 lead on a 13-2 run at the halfway point of the first half. Senior Parker Wentz, who became the Wildcats all-time leader in games played with 116, was 3-4 from beyond the arc in the first half for nine points.

The Wildcats started off the game 6-10 from three and grabbed a 24-17 lead after a pair of Wentz threes dropped with under six minutes to go in the half. Freshman guard Jaylen Franklin scored the final five points for ACU, as the Wildcats took a 33-26 lead into the locker room.

ACU quickly pushed the lead back to double digits when senior forward Austin Cooke, like he did to start the game, hit a three to begin the second half and made it 36-26 Wildcats. The Islanders, who shot 42 percent in the first half, began to get in an offensive flow and put together an 18-6 run that changed the course of the game from then on. Corpus Christi, one of the best in the nation at forcing turnovers, capitalized on their takeaways with easy layups and shots at the rim.

With 10:45 to go, junior guard Jovan Crnic and Cooke hit threes to stop the bleeding. Cooke followed that up with a layup to make it 56-54 Islanders with 5:37 to go. The dagger for ACU came with under two minutes to go, trailing 60-54. In desperate need of a stop, the Wildcats couldn’t contain the Islanders, as sophomore guard Ehab Amin drove the lane and found the open shooter, senior Brandon Pye, in the corner who knocked down the three to move the Islander lead to nine, 63-54.

The Wildcats made one last attempt to tie the game in the final seconds. Senior point guard Jalen Little sank a layup and absorbed the foul for the three-point play, then Franklin scored on another layup to make it 63-59 with over a minute to go. The Islanders would get one final stop against the Wildcats to ensure the win on senior night.

Franklin and Cooke led the way for ACU with 15 points each. Franklin added four rebounds, three assists and two steals, while making seven of 13 shot attempts. Cooke added a team-high five rebounds while going 3-5 from deep. All nine of Wentz points came courtesy of the three-point ball in the first half.

Junior Rashawn Thomas dropped in a near double-double of 22 points and nine rebounds. The star forward sank eight of 12 shots while recording two blocks. Senior guards Hameed Ali and Jelani Currie each finished with 11 points on a combined 9-14 shooting. Ali also added five steals in the game, making him the programs all-time leader in steals with 185.

The Wildcats finished the game at 46 percent shooting, but their 50 percent shooting and 6-11 three-point makes in the first half was a big reason why they led at the break. The Islanders improved their shooting to 50 percent in the second half, while scoring 17 points off ACU turnovers. Corpus Christi recorded 10 steals as a team, compared to ACU’s five.

The Wildcats will return home to play their final three games of the season at home in Moody Coliseum.