By Max Preston
Posted on February 15, 2016 | Sports | Comments Off on Men and women’s tennis battle hard in different locations 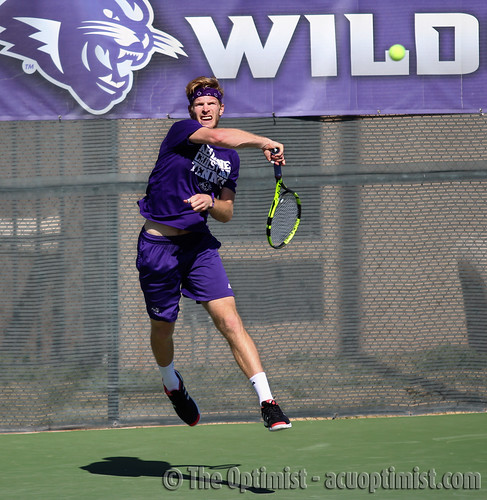 This weekend, men’s and women’s tennis were active at home and on the road. The women traveled to College Station on Sunday to face no. 16 ranked Texas A&M, while the men stayed on campus and faced the University of Missouri-Kansas on Friday. The team scores included a 7-0 loss for the Women and 6-1 win for the men.

The women had a tough task as they matched up against a very tough Texas A&M team this weekend. Coming into the matches, A&M had faced six different ranked opponents and had beaten three of them. While the women weren’t able to come away with victories, they still gave the Aggies a battle and kept up with them.

Standouts for the women in singles included sophomore Lucile Pothier and senior Nada Marjanovic. Pothier and Marjanovic were the only ones that came away with a set victory against their competitors. Pothier’s score line was 6-2, 3-6, 7-5 and Marjanovic’s went 6-2, 5-7, 6-2.

In doubles, the standout team was Andrea Crook and Marjanovic. They lead in their match by a score of 5-4 before it sadly came to an unfinished result.

“We all fought hard and showed positive energy on the court,” Pothier said. “Even if we were not rewarded with a victory, our level of play was good and I look forward with the team for our next matches at El Paso. Personally, being close to the victory in singles showed me that nothing is impossible even against a big team. I still need to work on being solid and consistent against these kind of opponents.”

The men had a successful match up against Kansas as they were able to take a convincing team victory. The men weren’t able to pick up a doubles victory, however, they made up for it in singles sweeping their competitors six matches to none.

Standouts for the Wildcats included freshman Josh Sheehy, sophomore Hunter Holman, and junior Nico Agritelley. Sheehy continued to impress as the freshman took down another opponent at the no. 1 spot by a score of 7-6 (4-0), 6-4. Holman dominated in his singles match at the number four spot putting up a score of 6-2, 6-1. Agritelley was strong coming off of his injury and got a convincing victory, 6-3, 6-3.

“As a team we were disappointed when we lost the doubles point, but it only counts as one point so we knew it was nowhere close to the end of the match,” Sheehy said. “As our coach said, ‘They only kicked a field goal, it’s our turn to come back out and score the touchdown.’ Everyone came out motivated for singles because we knew we how hard we would have fight back to win, and that is exactly what we did. All six singles played great and secured the victories and Im proud that we were able to perform at this level in front of our home crowd.”