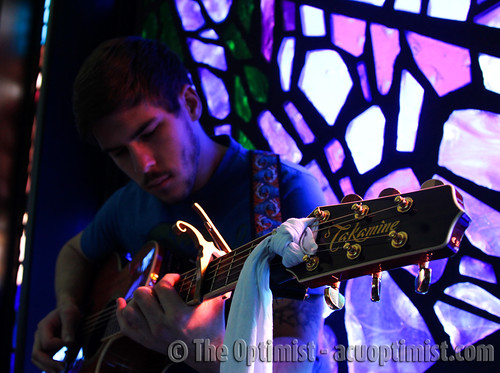 Abilene is anything but boring for Micah Bynum. He used to live in the paradise of Hawaii, but today he’s pursuing his passion for music here in West Texas.

Although he’s not studying music, Bynum is finding ways to play professionally in venues like Play Faire Park, the Neon Parrot Lounge and Mezamiz Coffee House. He’s recording music with studio owner and ACU alumnus Alex Whitten. He also plans to enter the West Texas Songwriter Championship, and he’s doing it all right here in Abilene.

Bynum, senior communications major, considers Honolulu, Hawaii to be his home, although he has lived in many places because his father was in the Navy. Both of his parents graduated from ACU and his mother was in the choir while his father played saxophone in the Big Purple Band.

Bynum’s musical journey started when he was a freshman in high school, when he bought a cheap bass guitar so he could play along with a guitar-playing neighbor.

“My parents and I had no idea that it would take off the way it did,” Bynum said. “I figured out music theory on my own.”

Bynum never had a formal music lesson, so he learned to play by listening. His parents were supportive and helped him pay for instruments and recording equipment. Today Bynum sings and plays guitar, ukulele, mandolin, cello, banjo, harmonica, bass guitar and percussion.

“I would love to play music for the rest of my life,” he said.

Although some people told him he could make a career out of music, Bynum chose to study communications instead of music. After he graduates in May, he plans to work in communications while his fiancé, Megan Schroeder, senior speech pathology major from Lubbock, goes to graduate school. Once she finishes school, his plan is to then study music therapy.

“It’s one thing to do this for myself, but it’s a whole other thing entirely to serve God’s children,” Bynum said.

Music is not only his passion, but it’s also a way of sharing parts of his life with complete strangers. He said he believes the purpose of music is to tell stories and create a “unique human connection.”

Bynum draws his inspiration from artists like Trace Bundy, Andy McKee, Antoine Dufour and Preston Reed. His style involves finger picking and percussive elements on acoustic guitar. Some of his songs are complicated stories, while others are about simple moments in life.

In his song “Livin,” Bynum changes between major and minor keys to show the ups and downs of life and the song starts and ends with percussive heartbeats. Another song, called “The One That Got Away,” is about a fish getting away from a fisher. He said the flow and dynamics of the song reminded him of a fish pulling on a reel.

Bynum started playing live in Abilene with open-mic nights at Monk’s Café during his freshman and sophomore years, but felt like it wasn’t worth his time because the audience wasn’t very attentive.

Last summer, he started playing paying shows at Play Faire Park, the mini golf course near 1st Street and Park Ave. He continued to connect with local venues and had the opportunity to play at the Grace Museum for the summer Children’s Festival. Through persistence and self-marketing with his three-song demo, Bynum booked for himself paying gigs at The Mill, the Neon Parrot Lounge and The Pourhouse.

“I do what I do so that I see the reaction,” he said. “It’s the people who stop in their tracks and sit down and listen and enjoy and they smile.”

Bynum plans to finish recording with Empty Light Studios, owned by ACU alumnus Alex Whitten. He will sell CDs at upcoming performances and will apply to get his songs on iTunes.

The music scene in Abilene is thriving and ACU students can be a part of it.

“Be confident,” Bynum said. “If you have something worth sharing, don’t devalue your gift.”

Bynum will perform Friday from 7:30-10 p.m. at Mezamiz Coffee House on 7th Street and Saturday from 10:15 p.m.-midnight at the Neon Parrot Lounge on Pine Street.

Posted by Haley Remenar on Feb 3rd, 2016 and filed under Arts & Culture, Features, Showcase. You can follow any responses to this entry through the RSS 2.0. Both comments and pings are currently closed.  - This post has been viewed 2230 times.