By Brittany Jackson
Posted on February 21, 2016 | News,Showcase | Comments Off on GATA, Galaxy and sophomores take home the trophy 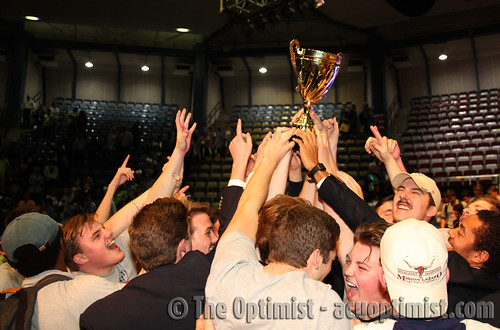 For the first time since 1986, the women of GATA brought home the Sing Song trophy. The men of Galaxy came back for a win since their last one in 2008, and the sophomore class chalked up its thirteenth win in Sing Song history.

GATA director Macie Liptoi said breaking the 34-year losing streak left her wanting to cry, celebrate and scream all at the same time.

“Thirty-four years of not having our named called on that stage, and to be part of the group and to help the group that finally came out and proved that we deserve to be on this stage was incredible,” said Liptoi, senior worship ministry major from Plano. “You can ask any of the girls, after the last performance, we hadn’t even won yet, and we just wept because it was magic.”

Liptoi said going into Sing Song the women of GATA knew their act was strong, but didn’t know they would place so well in each category. When it came down to it, they laid their best on the table and hoped it was enough for the judges. Liptoi said what really motivated the women was the knowledge that no matter where they placed, they had sponsors and alumni that supported them and would be proud of their dedication. So, for her and the other women in the social club, it became much more than just winning, but about representing GATA well.

“The fact that five years ago GATA was almost completely dead and we just ramped up, this is an amazing thing,” she said. “I think this is a classy kind of introduction to ‘this is the new GATA.’ We’re back and we’re ready to take on everything that ACU gives to us, and ready to take it on with dignity and grace, and with a Christ-like mentality.”

The men of Galaxy secured their first win since 2008, making their record an even 26 wins.

“One thing I always said was that we needed to outwork everyone in the practice room. That was where we were going to win,” said Galaxy director David Martinez. “I mean, there are a whole bunch of other clubs out there that have really talented singers. We just knew that if we poured our hearts and soul into it that we could have a good shot.”

Martinez, junior kinesiology major from Webster, said despite the act having fewer members than in years past, the men were passionate enough about their theme that they were still in the running to win.

“We lost a lot of guys for different reasons, a lot of it was just an attitude going into the beginning of the year, but I knew that once we had that group together that this group was going to sell out and just buy into the idea of ‘OK we’re just going to focus on one goal, and that’s winning,'” he said. “That’s just the mindset that we came to every practice with, like OK we’re going to be winners and we’re going to win in the practice room so that we can win on stage.”

The sophomores came in stronger from last year, having placed second overall as Freshman Donuts, to bring home the trophy for their class.

Sophomore director Cameron Walter said none of it would have been possible without his leadership team. Because of them, and despite the smaller size of the act, the students were able to represent their class unlike anything the judges have seen from the last five years.

For the Sing Song Give Back Program, each winning group was awarded $1,000 to give to a charity of its choice. The women of GATA’s give-back effort is to help pay the medical expenses of GATA alumna Christina Ponomarenko (’15), the men of Galaxy will help fund the Kirk Goodwin Run and the sophomore class will aid World’s Back Yard in Abilene.