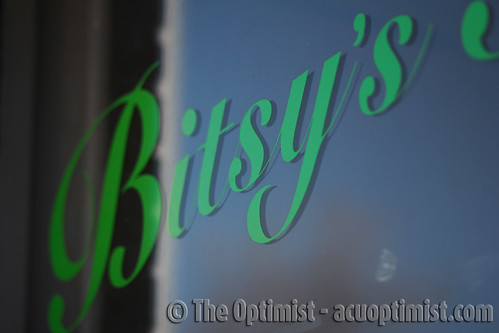 Bitsy Gregory, the owner, closed the doors in May of 2013, but didn’t sell the property until last Friday.

It may have been two years coming, but Bitsy finally handed over her keys and left for good. She did not release the name of the buyer, and no signs indicating the name of the new owner can be found on the property, but Bitsy said he or she is bound to make something of the place.

Looking back on her time on Campus Court, she said the people have been nothing but kind to her, and that she’ll miss all the familiar faces that would frequent her flower shop over the past forty years.

The inspiration to go into floristry came in part from her sister, Bitsy said, who used to call her from Forth Worth, urging her to take classes in the art.

“It’s just been a good life, and I never planned to be a florist,” she said. “My sister got onto me and said ‘you’ve got to have something to do, I’m going to teach you how to do flowers.'”

Bitsy said her sister would call her every afternoon around 5 p.m. for a lesson, teaching her over the phone how to cut stems, how much water to use and how to keep stems from breaking. Every so often Bitsy would make the drive to Fort Worth to show demonstrations to her sister, which she would check over for errors.

Despite working on arrangements each night, Bitsy didn’t commit full time to floristry until she lost her job. She then began making and selling arrangements out of her house in Abilene. After doing so for a while, she said city officials contacted her and told her to move to a commercial business area if she wanted to continue vending merchandise, as it is restricted in residential areas.

Keeping an ear to the ground, she waited for an affordable space to open up where she felt comfortable starting her business.

On Sept. 10, 1975, Bitsy opened the family-owned business on Campus Court. Over the next several years after renting the first store, the shops surrounding her became available to rent. She said, despite the original landowner’s skepticism about whether she could manage the multiple properties, she couldn’t miss the opportunity and bought the three shops surrounding her own.

“Of course I’ve always been taught to try to do it your best,” she said. “You have never seen a more scared person in your life than when he told me that he wanted cash and that he’d like for me to bring it to him.”

Her husband had recently retired and joined her in the office, often going on deliveries for her.

“He became our delivery boy and he had more fun with that; he would wear his cowboy hat and his boots,” Bitsy said. “His boots would always jingle, so they would call him Jingles. He would tell them a little bit about the flowers or something like that, and all the kids had something to go and tell their mommy and daddy.”

Her son Colin also helped with deliveries, riding his skateboard between the shop and the women’s residence halls.

“He was the only one to help us because the other boys just sneezed and sniffled,” Bitsy said.

Colin remembers working all night on an assembly line of 12 people, making more than 4,000 unique mums for an event in town. Bitsy isn’t just known around Abilene; her floristry’s roots have grown far outside of this West Texas town.

“People I met in London knew her,” Colin said. He said he had missed a train and overheard some people talking about his mother’s business.

“That just tickled him to death; he got the biggest charge out of that,” Bitsy said.

After her three sons grew up and moved out of the house, Bitsy and her husband moved into the apartment adjacent to the original store property. They lived there for almost 26 years.

“We just ate and slept and waited on the customers, and we enjoyed it,” Bitsy said.

About two years ago, after her husband passed away, Bitsy decided it was time to move out of the building and, subsequently, close up shop.

She still entertains the idea of riding a paddleboat down the Mississippi River someday.

“I’ve enjoyed my life here,” she said, looking around the shop as her family and friends helped move the leftover inventory from the shelves and into truck beds.

Posted by Brittany Jackson on Feb 19th, 2016 and filed under News, Showcase. You can follow any responses to this entry through the RSS 2.0. Both comments and pings are currently closed.  - This post has been viewed 1737 times.