By Derek Marcelain
Posted on January 29, 2016 | Features,Sports | Comments Off on Sheehy puts five-star talent to the test 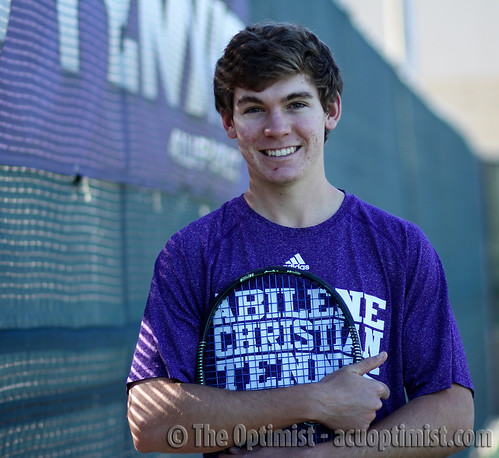 Josh Sheehy might not be a name recognized by most people on campus. The general ACU community may not even know that he’s a student-athlete, representing the Wildcats on the tennis court. And most probably don’t know that he was a five-star recruit out of high school that ACU was lucky enough to grab.

But that’s how he likes it.

Freshman Josh Sheehy likes to let his actions and results do the talking for him. By that standard, he’s unmissable.

The Arlington native has got off to a great start in his collegiate career. Sheehy has compiled a 4-1 singles record and a 3-2 overall record for doubles.

In his season debut, Sheehy came in at the No. 1 spot for ACU and earned the first Southland Conference Player of the Week Award on the new season.

Although the most recent, it’s certainly not the only tennis award Sheehy has won. The Grace Prep graduate came to ACU ranked 51st nationally and was in the top-10 ranking in Texas and the Gulf states. Sheehy also has been named a 2015 TAPPS 3A State Champion, men’s doubles quarterfinalists at the U.S. Open National Playoffs, played in the National Junior Tournament and was ranked No. 1 in Texas for Boys’ 18 and under.

So how did this 2015 National High School Tennis All-American choose ACU?

“When I came on a visit here, I didn’t know what to expect,” Sheehy said. “But as soon as I met the team and the coaches, it just felt like the right place.”

Making the adjustment from high school to the collegiate level is something every freshman must go through.

“ACU has been great so far and I love it here,” Sheehy said. “School is about what I expected, as far as how hard it would be. With tennis, I knew it would be a lot harder, but I kinda feel like I have risen to the level so far.”

Rising to the challenge has been a continuous theme in Sheehy’s life. His parents, Jack and Laurie, were both passionate about tennis while he grew up and his mom even played tennis at the collegiate level for Oral Roberts. They taught him all the basics of the game and eventually led him to his own passion for tennis, although it didn’t happen overnight.

Sheehy set the bar high with a successful start of his ACU career, not to mention the accolades and expectations from friends, family and teammates. But for now Sheehy said he’s taking it one day at a time.

“It’s hard to set goals for yourself as a freshman coming in, because you really don’t know what to expect,” Sheehy said. “I just want to play at a competitive level and help my teammates and let everyone know that even though I’m a freshman, I can still play with anyone.”