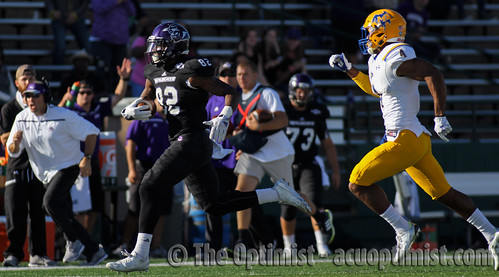 ACU’s top three wide receivers in 2015 didn’t see the field until their junior years, but it wasn’t because they were redshirted or behind upper classman.

Seniors Cedric Gilbert and Jonathan Epps, along with junior Carl Whitley entered ACU as junior college transfers and had an instant impact for the Wildcats.

Head coach Ken Collums said that he doesn’t want to try and get a lot of transfers because he wants younger players. However, he likes to get a few older guys that can fit in at ACU and fill a hole on the roster. 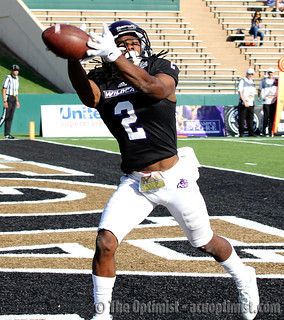 “I don’t like to take a bunch of transfers, because I want to keep guys here for as long as they can be here,” Collums said. “The fact is that when you get a quality transfer and he is a fit in your university he is going to do well. I am always looking to add a few transfers and a lot of it is based on need.”

Gilbert and Epps played last season in ACU’s first Div. I season and the impact was obvious.

Gilbert led the team in reception yards (667) and touchdowns (7). Epps became a solid utility player recording the second-most all-purpose yards on the team with 933, and filling in capably at corner with 30 tackles and two interceptions.

The pair were 1-2 when it came to most receiving categories in 2015. Gilbert led the team in catches (45), yards (688) and recorded a Southland best seven touchdowns.

Epps followed in catches (41), yards (464) and touchdowns (4). Junior Carl Whitley found his niche as the team’s deep threat snaring 21 passes for 374 yards and two touchdowns good enough for a team-leading 17.8 yards per catch.

The trio played just one year together, but they all shared a similar starting point to their collegiate careers, junior college.

Gilbert wasn’t too far away for ACU to scout, as he played his first two years at Cisco College. The 6-foot-2 senior recorded 63 catches for 936 yards and eight touchdowns in his JUCO career, good enough to garner interest from FBS schools: Louisiana Tech, Louisiana-Lafayette and North Texas. The big wide out decided to play for ACU instead.

Gilbert said he needed to prove himself at the Div. I level and show that he can play with the big boys. Gilbert went on to say that three wide outs showed that JUCO players can have an impact early on.

“Coming from a junior college to a Div. I school you have a lot to prove,” Gilbert said. “You went to JUCO out of high school so now you have to prove you can be a Div. I football player. So for us three to come in and lead the team that’s a big accomplishment.”

Epps had a different route to ACU, as he played defensive back his freshman year at Tyler Junior College. After a short stint at defensive back, he then moved to receiver for his sophomore season and compiled 26 catches for 322 yards and one touchdown.

The speedy return specialist and slot receiver flew under the radar of a lot of schools to pick ACU.

“I didn’t really have that may offers,” Epps said. “I had a lot of walk-on offers at big Div. I schools and a lot Div. II offers.” 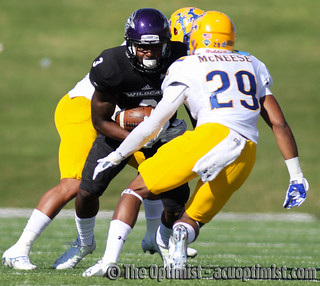 Epps reiterated Gilbert’s point saying that the trio made a great impact early on for ACU.

“I felt like we made a statement in a way,” Epps said. “Even though we come from junior colleges, we can go out there and make plays and compete with the best of them.”

Whitley took a similar route to Gilbert by playing two years at Cisco before playing at ACU. Whitley compiled over 900 receiving yards and 10 total touchdowns in his time as a receiver and return man for Cisco.

Collums said that you could see the on-field effect that the trio had this season. However, the staff will continue to keep the high school approach when it comes to receiver.

“You could tell the impact that those guys had,” Collums said. “They are older guys and good players. The big thing you can’t do with this is go oh my gosh we need to go wholesale transfer and take a bunch of guys. Trust what your doing, trust your approach, trust you ability to evaluate high school guys and your staff’s ability to do that.”