By Collin Wieder
Posted on November 20, 2015 | Sports | Comments Off on Football heads to Colorado for season finale 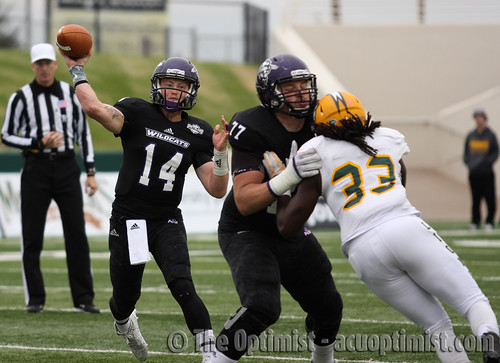 The Bears have had an inconsistent season, which has featured a 35-32 win over an 8-2 Portland State squad, but also included a 63-21 blowout at the hands of Northern Arizona.

Head coach Ken Collums says that NCU and ACU are similar in the type of seasons they have had.

“We want to win the matchups in our favor,” Collums said. “It should be a good game, both teams are very similar in that both have had big wins and disappointing, close losses.”

The Wildcat defense will look to stop an almost balanced offensive attack that features a run to pass ratio of 346:302. The Bears running game has been successful this season rushing for 1,605 yards at a 4.6 yards per carry clip. Freshman running back Trae Riek leads the Bears in rushing yards (666) and touchdowns (6). However, the running game is by committee as well with two other back rushing for 250-plus yards on the season.

ACU’s struggling run defense has been much improved over the last three games, giving up just 4.1 yards per carry and holding their last three opponents under 200 yards rushing. Sophomore linebacker Sam Denmark continues to be a dominant force leading the Southland in tackles with 127, 21 more than any other player.

Switching to offense, the ‘Cats will see less of freshman quarterback Dallas Sealey, as he re-injured his thumb last week against Southeastern Louisiana. Junior Parker McKenzie will get the nod to start, with Sealey coming in with various packages.

Collums said that Sealey’s injury has changed some things at the quarterback situation.

“Nothing has changed as far as what those two guys bring to the table,” Collums said. “The thing that has changed is that Dallas is not healthy. As a quarterback, the number one thing that you have throwing the ball is your thumb. If you don’t have a good grip on your thumb than the ball looks really really bad coming out.”

ACU’s offense should have an opportunity to put some points on a Northern Colorado defense that gives up 228.3 yards per game on the ground and five yards per carry.

Sophomore running back De’Andre Brown and senior running back Herschel Sims could get back into sync for a one-two punch for the first time since week two against HBU. Sims has been the constant the last two weeks gashing defenses on 7.6 yards per carry and two 40-plus yard touchdown runs.

Collums said the increase in carries for Sims has come from his big play ability.

“He is making more plays in the run game,” Collums said. “He’s playing well and he’s healthy. He has stayed nicked up a little bit for the last two years.”

The Bears’ pass defense isn’t solid either giving up 261.3 yards per game and a TD:INT ratio of 22:6. Expect the ‘Cats to take some shots with a veteran receiving corp that includes five guys with 20 or more catches. Seniors Cedric Gilbert and Jonathan Epps lead the team in catches, yards and touchdowns respectively. In fact, Gilbert leads the Southland in touchdown catches with six.