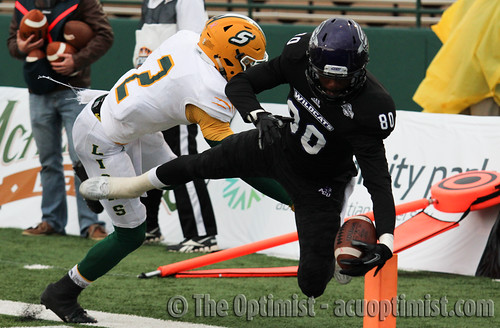 ACU football (3-7 overall, 3-6 conference) looked like it was headed for its seventh straight loss with another slow start, but the Wildcats recovered with 21-second half points to beat the Southeastern Louisiana Lions (4-6, 3-5) 21-17.

Junior quarterback Parker McKenzie found senior tight end Jamie Walker for a one-yard touchdown pass on fourth and goal with 22 seconds left in the game to seal the Wildcats’ third win of the season.

Head coach Ken Collums said the team has been fighting to get this streak off their backs.

“The locker room has been all over the place for the last six weeks,” Collums said. “That game could have gone either way but it came down to the wire and Southeastern is a good football team. We were fortunate to win, but our guys fought and ultimately we made enough plays down the stretch to win.”

The Wildcats first half continued to be the same song different verse for ACU, as the ‘Cats failed to produce even 100 offensive yards or any points. The Wildcats trailed 7-0 at half as freshman kicker Zach Lehr missed a 42-yard field goal late in the 2nd.

However, the ‘Cats outscored the Lions 21-10 in the second half to come away with a badly needed win.

Offensively, the revolving door at quarterback continues as sophomore starter Dallas Sealey was pulled, after a slow start, for former starter McKenzie. McKenzie had a good outing, completing 21-of-28 passes for 219 yards, two touchdowns, and one interception.

ACU’s playmakers on the outside were the real story as seniors Monte Green-Avery and Cedric Gilbert combined for nine catches, 144 yards and one touchdown.

The running game didn’t break out, but senior running back Herschel Sims found the end zone on a long run for the second consecutive week. Sims rushed 14 times for 75 yards, which included a 42-yard touchdown run. Sims has put together two nice performances as he compiled 22 carries for 167 yards and two 40-plus touchdown runs.

ACU plays its final game of the season next Saturday in Greeley, Colorado against Northern Colorado at 1 p.m.