‘Cats upset by Colonels for second time this season

By Jonathan Raitz
Posted on November 8, 2015 | Sports | Comments Off on ‘Cats upset by Colonels for second time this season 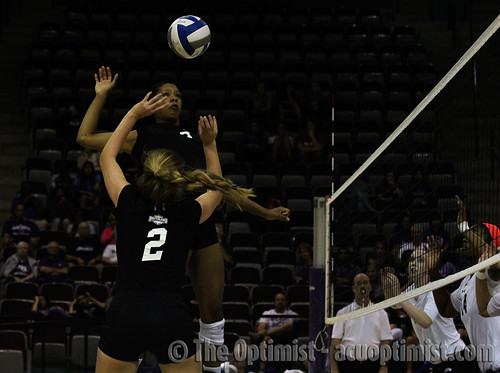 ACU volleyball ran into a somewhat of a hiccup on Saturday when they lost in straight sets to conference rival Nicholls State.

Statistically the match was very similar as Nicholls State had 67 digs to ACU’s 66, and converted just five more kills than the Wildcats at 43 to 38. At the service line the Colonels did create a plus-eight advantage recording nine aces to senior Sarah Siemens lone ace for the Wildcats.

Game one proved a grudge match as it took 52 points to decide the set, but Nicholls was able to come away with a 27-25 win. The Wildcats trailed through the early stages of the set, but after a Siemens kill and two Nicholls State errors the score was tied at 22-22.

The sudden 3-0 scoring by the Wildcats forced a timeout by Nicholls State, as it seemed ACU had found their rhythm. However, Nicholls capitalized on two quick Wildcat errors to bring it to set-point and force a timeout by head coach Jason Bibler.

Out of the timeout ACU tied the game at 24-24 on a kill from senior Jennie Loerch and another Nicholls State error, but the Colonels bounced back to score three of the next four points to clinch the game.

“We weren’t able to get into a rhythm on Saturday,” Bibler said. “We kept making mistakes at inopportune times.”

ACU started to find a little bit of rhythm in the second set leading 18-15, but Nicholls State outscored the Wildcats 10-3 the rest of the way en route to a 2-0 lead.

Nicholls State trailed briefly in game three, but used a 7-2 run to push the score to match point at 24-19. ACU battled off the next two points with kills from freshmen Lauren Walker and Jacey Smith, but the Colonels dashed any hopes of a comeback with their 43rd and final kill of the match, completing the sweep.

“I think they are so good out of the system that we struggle with that,” Bibler said. “Both of their big outside hitters are used to hitting a high set, so even when we get them in positions that favor us defensively, they can still score.”

ACU continues their season-ending road trip this Thursday in a rematch against third-place Stephen F. Austin.