By Jonathan Raitz
Posted on November 15, 2015 | Sports | Comments Off on ‘Cats close out season with thrilling win 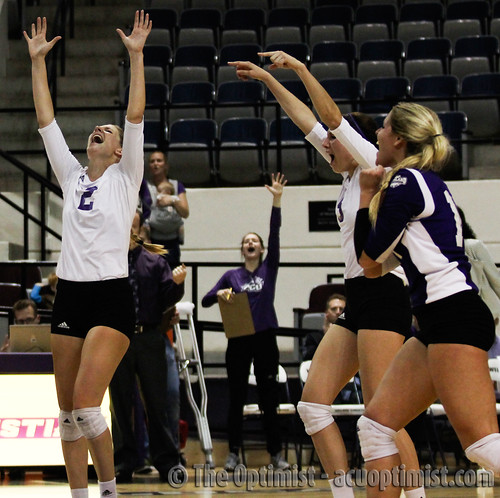 ACU volleyball closed out their season in style with 3-2 victory over Northwestern State to clinch fourth place in the final Southland Conference standings.

Similar to how they started many matches, the Wildcats jumped out to an early advantage Saturday afternoon, with a 28-26 and 25-22 victory. With the 2-0 lead, ACU looked to be on their way to a straight set win over Northwestern for the second time this season.

However, the lady demons bounced back in the third and fourth set to tie the match at 2-2. The Wildcats had their fair share of chances to clinch the match holding leads as big as three early in the set.

Northwestern State took the lead at 11-10 off one of ACU’s four attack errors in the set and built a three-point lead at 23-20. With the lady demons just two points away from taking the set head coach Jason Bibler called the team’s final timeout.

Out of the timeout the Wildcats took advantage of three straight Northwestern State to tie the set at 23-23. But Northwestern clinched the set 25-23 with their 15th kill of the set and one of 11 service aces on the day.

The lady demons posted an impressive 25-16 set four win to force what coach Bibler and his team knew was going to be one of the toughest sets all season.

“We said this was going to be the hardest set we have ever had to play,” Bibler said.

Bibler and his team were right as the final score turned out to be 20-18 in ACU’s favor. The Wildcats jumped out to a 9-4 lead after three consecutive Northwestern State errors and senior Sarah Siemens pushed the score to 12-8 with her sixth kill of the match.

Northwestern State did not go away as they rattled off five straight points to take a 13-12 lead, but the Wildcats regained the advantage at 18-17 with another kill from senior Jennie Loerch.

“Jennie was huge for us this year, but having other girls around that were able to step up and score points for us took a lot of pressure off of her.” Bibler said. “She was still dominant in matches of course, but with way fewer attempts over all.”

After Northwestern State tied the score at 18-18 with their 10th kill of the game Loerch converted her match-high 21st kill to give ACU the lead for good. On the next possession the lady demons record their fifth error of the set giving the Wildcats the 20-18 victory.

The win over Northwestern State pushed the Wildcats weekend record to 1-1 as they fell 3-1 in a rematch against Stephen F. Austin on Thursday night. Despite taking the first set 26-24, the lady jacks battled back to win three consecutive sets against ACU for the second time this season.

With the 1-1 finish ACU posts their best Southland Conference record ever at 9-7, and if eligible for postseason play would grab the fourth seed in the conference tournament which begins next weekend.

The Wildcats were originally picked to finish 12th in the Southland Conference preseason rankings.

“Even though we aren’t able to play in the postseason they always played like we could and that says a lot about their attitude and their mentality all season,” Bibler said.

ACU will return all but three players next year in Loerch, Siemens and Madison Hoover. Loerch was fourth in the Southland Conference in kills with 215, while Siemens led the conference with 621 assists. Hoover finished the season with a conference-leading 348 digs and her career second all-time with 1,742.