By Jonathan Raitz
Posted on November 8, 2015 | Sports | Comments Off on ‘Cats clinch best conference record since 2011 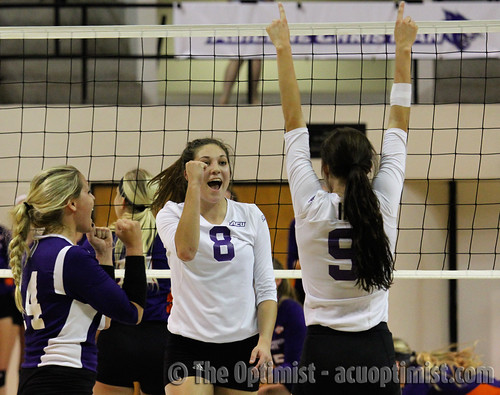 ACU volleyball clinched their first .500 or better conference season since 2011 with a 3-1 victory over McNeese State.

McNeese State started the match strong taking eight of the first 11 points to lead ACU 8-3. After consecutive errors by McNeese State, the Wildcat offense found life, rattling off kills by freshman Lauren Walker and senior Jennie Loerch, and getting a service ace from freshman Lillian Drever.

Control of the set continued to waver back and forth between the teams, with each team posting 3-0 scoring runs. However, two kills by junior Lexi Mercier brought the score to 24-21, setting ACU up with their first game point. Despite McNeese State staving off consecutive set-clinching attempts by the Wildcats, Loerch converted a kill to cap the game at 25-23.

Loerch led the Wildcat’s offensively with a game-high 17 kills and 19.5 points.

In game two the Wildcat’s would use a late comeback in the marathon set to take a 2-0 lead in the match. With ACU trailing 25-24 freshman Kendall Bosse evened the score with one of her 15 kills.

Then it was time for fellow freshman Jacey Smith to step up as she delivered the final two points to give the Wildcats a 27-25 victory.

With a 2-0 lead in the match, ACU stumbled in game three as McNeese eventually broke through with a 25-18 win. The Wildcats struggled to figure out an effective blocking scheme and were hindered by eight errors in the set.

Despite the game three struggles, the team was able to shake it off and hold off a late McNeese rally. After two straight McNeese attack errors the Wildcats led 22-16 and looked ready to finish the game strong. However, four ACU errors contributed to a 5-0 run to cut the lead to one at 22-21, the last error a lift committed by senior Sarah Siemens.

Siemens quickly redeemed herself with her seventh kill of the match to end the run and push the lead to two points.

After a McNeese State error the Wildcats found themselves just one point away from their eighth win of the season. An error by Loerch brought the score to 24-23, but before McNeese could capitalize, Loerch drove home her final kill to seal the victory.

Loerch added nine digs to her stellar offensive outing, while Siemens fell just three kills short of a triple-double with 51 assist, 16 digs and seven kills. Senior Madison Hoover led the way defensively for the Wildcats with 20 digs, followed by Drever with 16. ACU also put up an impressive nine blocks led by Mercier and Walker each with four.

The win improves the Wildcats conference record to 8-5 with three matches remaining. ACU will put their two-game winning streak on the line in a rematch with Nicholls State. The Colonels bested the Wildcats 3-1 just two weeks ago. A win would secure the volleyball’s team winning conference record for the first time since moving to Div. 1.