Wildcats take on SFA in biggest game since Div. I move

By Daniel Zepeda
Posted on October 27, 2015 | Columnists,Sports | Comments Off on Wildcats take on SFA in biggest game since Div. I move 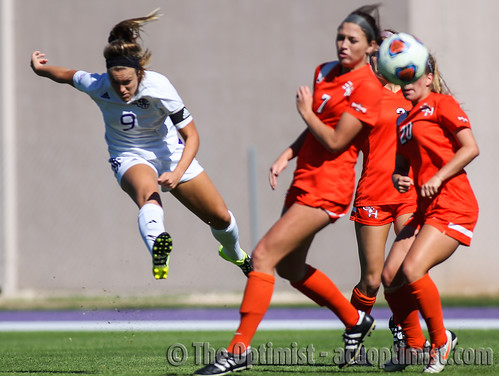 Women’s soccer welcomes conference powerhouse Stephen F. Austin to town on Tuesday afternoon. The game is arguably one of the biggest in the program’s nine-year history, as you’d need to go back to the historic 2011 season where the Wildcats went 20-2-1 and an undefeated 13-0-1 in the Lone Star Conference, to find a game of equal value.

A case can also be made that this is the biggest ACU athletic event since the move to Div. I in 2013.

The Wildcats have a shot at the conference championship, but will need to play the best ball of the season and get some serious help from other teams. ACU needs to win the final two games of their season against SFA and Incarnate Word. Not only that, the Ladyjacks will need to lose against ACU and Sam Houston, while Houston Baptist, who now holds the second spot in the conference, needs to go winless against Lamar and Texas A&M-Corpus Christi.

The Wildcats are almost a lock for a win against UIW at home, who sit at the bottom of the conference with a 1-6-2 Southland record.

SFA (7-0-2, 8-6-2) vs. Sam Houston (4-3-2, 7-6-3) will more than likely go the Ladyjacks way, ending ACU’s title hopes. Although, after Sam Houston’s 2-2 tie with the Wildcats to dimmer their championship hopes, the Bearkats may have received a shot in the arm after going winless in their previous three games.

The defending tournament champion HBU face Lamar (2-6-1, 5-11-1) and TAMCC (5-4-1, 5-9-2) to finish off their year. ACU needs the Huskies to lose or tie against both. Best case scenario, the Cardinals force a tie with HBU, even though Lamar is 0-4-1 over their last five games. If that happens, and Corpus Christi can continue to ride their hot streak (winners of three straight, five of last six), the Wildcats could grab sole possession of first place.

The Ladyjacks want to hand the Wildcats their second loss of conference and end their hopes for a conference title. And, they have the ability. Since 2011, Stephen F. Austin has posted an unprecedented 45-1-3 record since 2011. They have one loss in almost five years, let that sink in. Their only loss came in their conference opener in 2013, after which they won out their remaining schedule and posted an 11-0 record in 2014 the following year.

Since the Wildcats move to Div. I, ACU is winless in the two matchups against SFA. Last season, the Wildcats were edged out in a 1-0 loss, in a game that could have easily gone to ACU, with the only goal coming in the final 10 minutes of action. In 2013, SFA took down ACU in Nacogdoches, 2-0. The Wildcats will rely on the offensive output from senior Lindsey Jones, along with the powerful freshmen duo of Dylan Owens and Sophie Standifer. The three have combined for 14 goals during the year. SFA has not allowed a goal in three games, so the offense will have to break through and take advantage of opportunities.

The Wildcats will have to play their final two games of the season without star defender sophomore Chantal Kinsey. Kinsey injured her knee in the SHSU game on what is believed to be an ACL tear. ACU will need to find a way to replace her productivity, especially against the high powered offense of SFA.

A lot of things need to happen if ACU is to end up on top of the Southland Conference. First and foremost, the Wildcats need to beat a team who has only lost once since 2011. Difficult, yes. But, with ACU playing the best it has in years, it is definitely doable. If the Wildcats can get the win of the year at home, finish off UIW, and get some help, expect the first conference title for ACU since the Div. I move.