Wildcats blown out on Homecoming in third consecutive loss

By Collin Wieder
Posted on October 18, 2015 | Sports | Comments Off on Wildcats blown out on Homecoming in third consecutive loss 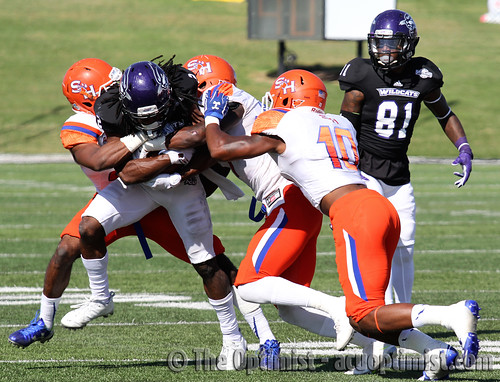 ACU’s bad habit of starting slow showed up again as the ‘Cats allowed Sam to jump out to an insurmountable 35-7 halftime lead.

Head coach Ken Collums said the team didn’t play to the level they were capable of.

“We were better than we played,” Collums said. “I am extremely disappointed. We didn’t tackle well and we didn’t execute well.”

The offense hit a new low yesterday as the ‘Cats turned the ball over twice in the first quarter. Junior quarterback Parker McKenzie handed Sam Houston the momentum early by throwing an interception on his first pass attempt of the game. He would throw his second just three passes later off the hands of senior receiver Cedric Gilbert, leading to his benching for the rest of the first half.

The Bearkats started the aerial attack early as junior quarterback Jared Johnson threw a touchdown on three of the first four drives. Sam started the game with a 64-yard bomb off the flea flicker and the ‘Kats rolled from there.

Freshman quarterback Dallas Sealey performed admirably in relief, but the Sam pass rush was too much for the scrambler. Sealey went 11-for-15 for 92 yards and rushed for 17 yards and a touchdown. Gilbert continued to struggle with drops as one resulted in an easy interception for the Bearkats. However, he did lead the team in catches (4) and yards (56). Senior receiver Jonathan Epps also snagged four passes for 38 yards. 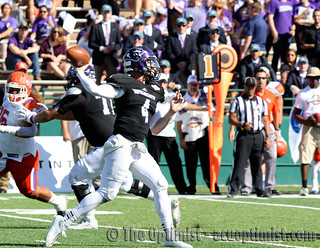 Collums didn’t say whether Sealey would retain the starting job next week.

The ‘Cats rushing attack continued to struggle and also sustained an injury as senior running back Herschel Sims had to leave the game. Junior Adrian Duncan led all backs with six carries for 41 yards and a touchdown, all when the game was out of hand.

ACU’s defense didn’t fair much better against the no. 11 Bearkats, as they gave up 528 total yards of offense. The run defense gave up another 200 yards plus rushing day, as the Bearkats rushed for 261 yards at a 5.6 yards per carry average.

ACU’s pass defense, which had played solid for most the season, was gashed by Johnson. The ‘Cats gave up 250 yards through the air and a season-high five touchdowns. 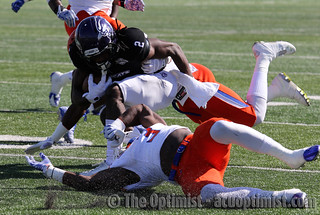 “Our last three opponents are quality teams,” Collums said. “We caught all three teams when they are playing well, and it is important to remember we haven’t recruited in the last eight years like these guys. It sounds like its an excuse but its the bottom line.”