By Collin Wieder
Posted on October 16, 2015 | Sports | Comments Off on Homecoming continues tough gauntlet for football 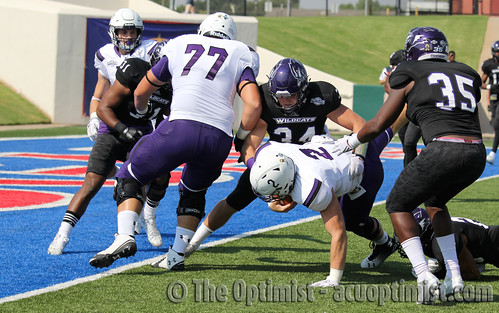 ACU football (2-3 overall, 2-2 conference) has endured maybe the roughest stretch of Southland football since its return to the conference in 2014.

The Wildcats have been outscored 86-42 over the last two weeks, including an embarrassing defensive effort against Lamar. The ‘Cats defense gave up a single game Southland Conference rushing record (347) to Lamar running back Kade Harrington. They will look to rectify the tough stretch against FCS number 11 Sam Houston State (3-2 overall, 3-1 conference).

Head coach Ken Collums said the past two road trips have not done well against two good teams and they need to play well to drop a ranked team in Sam Houston.

“We’ve taken two long road trips and haven’t done a great job on either one of them,” Collums said. “When you watch them (Sam) play it doesn’t take long to realize they are a good,” Collums said. “They are efficient on offense and it doesn’t matter who they play.”

ACU will need to show up defensively as Sam Houston State brings in the Southland’s best scoring offense (49.4) and yardage leader (590). The Bearkats use a two quarterback system that has been prolific this season.

Last year’s starter junior Jared Johnson and transfer Jeremiah Briscoe have combined to throw for a conference leading 1,706 yards and TD-to-INT ratio of 12:3. The run game isn’t far behind averaging 248.8 yards per game on the ground, good enough for 2nd in the Southland.

The defense has been the Wildcats’ achilles heel for five weeks. The run defense has given up 1,395 yards at a 6.3 yards per carry clip in just five games. Sophomore linebacker Sam Denmark and freshman cornerback Jabari Butler have been bright spots on the struggling unit. Denmark leads the conference in tackles with 70 and Butler leads the team with three interceptions.

The Wildcat offense needs to improve on starting fast as they have scored just seven points over the last two weeks in the first half. In fact, the ‘Cats managed just 65 yards at halftime of last week’s game. Junior quarterback Parker McKenzie looks to have fixed a lot of his early season woes after throwing for over 300 yards, three touchdowns and one interception last week.

ACU’s ground game has a lot of improving to do after rushing 29 times last week for just 37 yards. Sophomore De’Andre Brown and senior Herschel Sims have the ability to get the Wildcat rushing attack back on track. The two have combined for 456 yards and eight touchdowns on the season.

Gilbert leads the team in catches (24), yards (310) and touchdowns (6). Epps follows closely behind Gilbert with 23 catches, 295 yards and three touchdowns of his own.

Epps said that every week from here on in is going to be competitive so they have to show up.

“We have Sam Houston coming, McNeese who is 5-0 right now and Southeastern has one of the top defenses in the league so we have to keep getting better,” Epps said.

The game Kickoffs at 2:30 p.m. at Shotwell Stadium and will be broadcast on the American Sports Network.