By Collin Wieder
Posted on October 11, 2015 | Sports | Comments Off on Harrington sets record in dismantling of ‘Cats 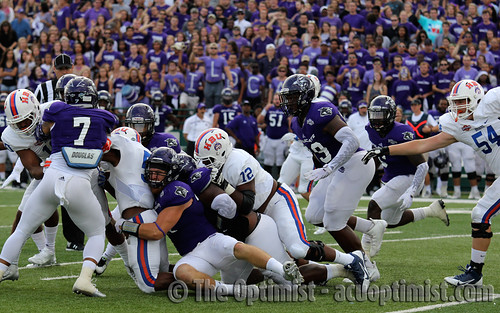 The Lamar Cardinals jumped out to a 24-0 first half lead before the Wildcats could even get on the scoreboard. ACU managed just 65 offensive yards in the first half while Harrington trounced the Wildcats porous run defense for 174 yards at half.

ACU head coach Ken Collums said the team needs to play better in the first half to win.

The running game suffered through its worst game of the season, with just 24 yards on 29 carries. The backs never got going, as the offensive line allowed penetration all night, giving the backs zero chances to make plays. Sophomore De’Andre Brown rushed for a career low -3 yards while senior Herschel Sims led the team in rushing with three carries for 16 yards and a touchdown.

The Wildcats got their offense going in the second half, but turnovers doomed the ‘Cats chances of a comeback. A Cedric Gilbert dropped pass resulted in an interception and Brown fumbled within the Cardinals’ five-yard line to seal the Wildcats fate.

Junior transfer Carl Whitley and freshman Kalin Sadler came up with some big plays combining to catch 3 passes for 93 yards.

On defense, the vicious cycle of no run defense continues as the ‘Cats allowed 391 rushing yards and an embarrassing conference record to Harrington. ACU simply got blown off the ball as Harrington rushed for touchdown runs of 80 and 62 yards.

Collums reiterated, as he has all season, that the run defense needs to play better, but he has confidence in defensive coordinator Darian Dulin.

“We have to figure out how to stop the run,” Collums said. “We have never ever struggled like this against the run. It’s disappointing for Coach Dulin, but those guys (coaches) on defense are good coaches and they will figure it out.”

The pass defense picked up its fifth and sixth interceptions of the season, and kept Lamar quarterback Joe Minden in check. Freshman corner Jabari Butler picked up his 3rd interception of the season and senior linebacker Lynn Grady recorded his first career interception. However, the Cardinals didn’t need a pass game to roll the ‘Cats for 521 yards of offense.

ACU returns to Shotwell next Saturday to play Sam Houston State for homecoming.