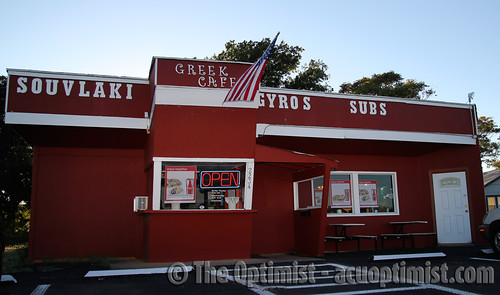 You just got lucky if you’re a lover of Greek cuisine who doesn’t want to drive to the other side of town.

The Greek Cafe opened at the corner of Treadaway Boulevard and Ambler Avenue less than a month ago, and it’s only a mile and a half away from campus, across the street from Little Italy Pizza. Its interior is reminiscent of a cozy ’60s diner, and the welcoming staff is attentive, friendly and accommodating.

The Greek Cafe’s gyro sandwich was simple but superb. The lamb was moist and warm but not too hot. Shaved razor thin, the tender gyro meat was effortlessly devoured. A warm and luscious pita was a delicious shell stuffed full of lamb, onions, tomatoes and tzatziki sauce. The gyro sandwich may seem simple, but the Greek Cafe nailed the key components and delivered an effortless, yet savory, experience.

For those craving sweeter tastes, the walnut baklava is a classic Greek dessert. Paper-thin layers of phyllo dough drenched in honey entomb a filling packed with honey, chopped walnuts and spices. Although the pastry I sampled was more dense than many baklavas, the baklava concluded my meal on a high note that left me content and stuffed.

Luigi Tetaj and Nathalie Telfort own and operate the Greek Cafe. The couple decided to open a Greek restaurant as a healthy option for the nearby college crowd.

“This restaurant has a lot of story behind it,” Telfort said. “I’m a nurse, and I actually used to work across the street, [at Hendrick Medical Center] and at night I couldn’t find anywhere to actually eat instead of at a place like Taco Bell.”

Tetaj owned the building, and the two decided to open a restaurant to cater to people like themselves. Telfort put together the menu and said so far everyone who has eaten at their restaurant has loved the food.

Telfort said she remembers trying to eat out on a student budget and designed a student special to fit college student’s financial woes.

The student special starts next Monday and includes either a gyro or chicken sublaki sandwich with fries and a drink. Telfort said customers should remember to bring their student or military IDs.