By Collin Wieder
Posted on October 7, 2015 | Sports | Comments Off on Football looks to recover after worst Southland loss 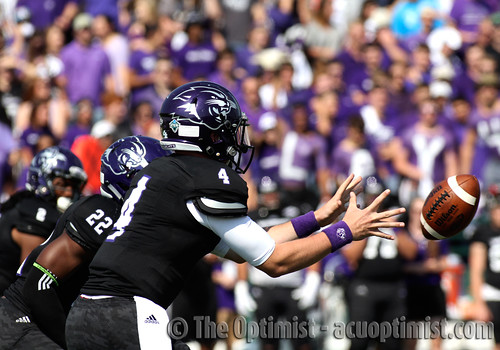 The ‘Cats defense found itself in familiar territory giving up 259 yards rushing in a blowout loss to Collums’ alma mater.

Head coach Ken Collums said that the offense continued to struggle running the football and stopping the run.

“What you saw last Saturday in Conway was our offense struggling to run the football,” said Collums. “The most important thing in the game is running the football and stopping the run, as a defense you can’t sit there and deal with 2nd down and 4.”

Lamar lost Southland leading passer Caleb Berry, but returns most of its offensive contributors. The Cards boast the second highest scoring offense in the conference with 43.3 points per game, including multiple leaders in both rushing and passing. Junior running back Kade Harrington leads all Southland running backs in yards yards (486) and touchdowns (six).

They also lead the conference in touchdown passes (11) despite the departure of Berry. Quarterbacks Joe Minden and Carson Earp have been highly efficient throwing for a combined 831 yards and a TD-to-INT ratio of 11-2. It will be an interesting preparation for the ‘Cats defense as Earp is listed as day-to-day with a shoulder injury while Minden was up and down against Southeastern Louisiana.

ACU’s defense should be prepping for both and the man the ‘Cats will be relying on is sophomore linebacker Sam Denmark. Denmark is crushing the Southland in total tackles with 59 in just four games. The second leader has 50 tackles in five games. He has to be on his game especially since the run defense has given up 1,004 rushing yards and eight touchdowns in the first four games.

Junior defensive tackle Josh Bloom said that the struggle against the run has become disheartening.

“We prepared all week for that, that’s the frustrating part,” Bloom said. “We went over things 1,000 times in our head and to go in there and basically be lost that’s frustrating for us older guys.”

On offense, junior quarterback Parker McKenzie comes off a rough start where he was sacked five times by a dominant UCA d-line. McKenzie has yet to return to 2014 form behind an injury plagued, young offensive line. He has thrown for 789 yards and seven touchdowns to four interceptions.

The ‘Cats have also struggled to get the run game going, because they either fall behind to early or get into shootouts. Running back De’Andre Brown has rushed for 347 yards and four touchdowns but on only 53 attempts. The ‘Cats have got to get his reps higher if they plan to slow down a prolific Cardinal offense.

The Wildcats face off against the Cardinals Saturday at 7 p.m. The game will also be broadcasted online on ESPN3.