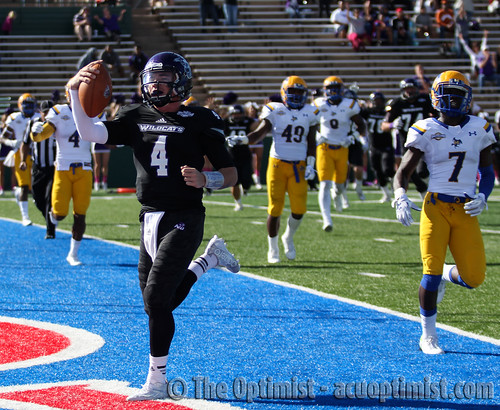 The ‘Cats losing streak increased to five games and sealed the first losing season in nine years for ACU.

Head coach Ken Collums said the team played up and down throughout the game but a lot of that had to do with the undefeated Cowboys.

“At times we played really, really well and other times we didn’t, we were too hit and miss,” Collums said. “But, you look across the field and they had something to do with that.”

The Wildcats out gained McNeese in yards, 320-306, but penalties and miscues doomed the ‘Cats late.

ACU return man Byron Proctor muffed a punt in the fourth quarter to give McNeese the ball on the ACU 15. The Cowboys failed to get into the end zone, but a Trent Manuel 23-yard field goal gave McNeese a 15-6, two possession lead late in the game.

Sophomore linebacker Sam Denmark sacked Cowboys’ quarterback Daniel Sams to force a three-and-out on the following drive to give ACU one more chance. Sealey and the offense were pinned deep at their own one-yard line, but managed to pick a quick first down. But the ‘Cats would go much further as they failed to convert a fourth and five at the ACU 21, ending the game.

Sealey’s first start featured some freshman mistakes and inconsistent play. But he led the offense to two touchdowns against a defense that had allowed just eight touchdowns in its first seven games. The freshman completed 22-of-42 passes for 284 yards for one touchdown and one pick. He also showed off his athleticism leading the team in rushing with 29 yards and catching a nine-yard touchdown. 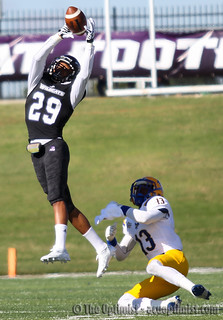 “I think for the most part Dallas did a good job managing things,” Collums said. “He took the big sack and of course everyone here knows that’s a bad decision. He probably had four chances to throw that ball away. His giftings worked against him (on that play) because he knows he can make a play with his feet. Buy and large I’m proud of the way he played.”

Wide receiver Carl Whitley had his best game of the season catching eight passes for 100 yards and one touchdown. Gilbert also went over the century mark catching three passes for 122 yards.

The struggling ACU defense recorded its best outing of the season, holding the Cowboys to just 306 yards of offense and forcing five turnovers. ACU’s run defense held McNeese to just 168 yards which marks the first time the ‘Cats have held an opponent under 200 rushing yards all season.

The ‘Cats pass defense was even better picking off Sams three times. True freshman corner Jabari Butler came up two of those, giving him a Southland leading six interceptions on the season. ACU kept pressure on Sams all day as sophomore LaMarcus Allen, senior Rishaad Wimbley and leading-tackler (13 total tackles) Sam Denmark all recorded a sack.

ACU returns to play next Saturday at 6 p.m. in Natchitoches, Louisiana against Northwestern State.