By Mercedez Hernandez
Posted on October 22, 2015 | News,Showcase | Comments Off on Floats, fireworks and festivities 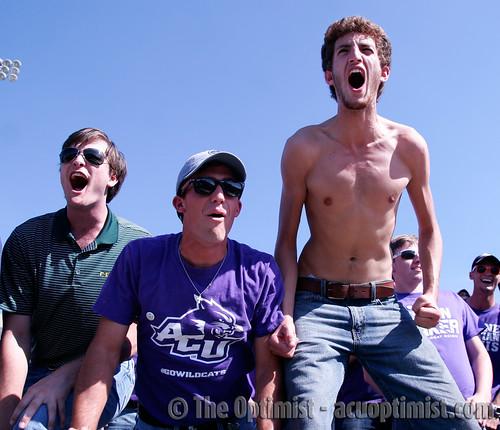 Homecoming may be over but the three-day event was full of exciting festivities.

On Friday evening, visitors were able to take part in the annual Homecoming carnival and rock out to student and alumni bands at JamFest.

“We cherish the opportunity to build a float while strengthening the bonds made through pledging on float night, as well as the opportunity to celebrate the tradition, spirit, and pride of ACU in the parade.” GSP president Colby Hatchett, a senior accounting and finance major from Fort Worth, said.

Later the same day students and alumni gathered to tailgate at Shotwell Stadium before Wildcats took on Sam Houston State University. The Wildcats lost to SHSU in a hard-fought game 49-21. Chera Chaney, a senior art major from Abilene, was crowned Homecoming queen at the game. As night fell on Saturday, Homecoming attendees gathered to view a fireworks show over Faubus Fountain Lake. The colorful show accidentally started a fire in a field off of Judge Ely Boulevard, which was quickly extinguished.  The Black Student’s Association also had a dance at the Windsor Hotel in downtown Abilene.

Homecoming wrapped up Sunday afternoon with the final performance of Mary Poppins at the Abilene Civic Center. Assistant director of alumni relations Samantha Adkins said this year’s Homecoming has received positive reviews and the association plans to hear complete feedback of the festivities soon.

“Homecoming 2015 was a success,” Adkins said. “We’ve heard from many alumni, faculty and staff members that they were pleased with the weekend’s festivities. We will be emailing alumni that attended their reunion a survey to get more feedback.  We always want to improve upon our work.”