Cross country to travel to Arkansas for Chili Pepper

By Savanah Silva
Posted on October 2, 2015 | Sports | Comments Off on Cross country to travel to Arkansas for Chili Pepper 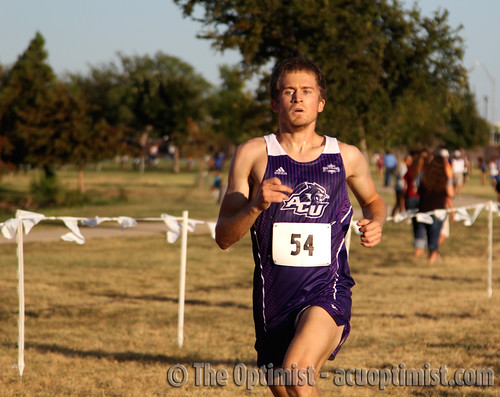 Once again, the ACU Cross country teams will travel to Arkansas for the second straight year as they compete in the Chili Pepper Cross Country meet put on by the University of Arkansas.

The meet draws hundreds of competitors and a vast amount of Div. I competition. The men will compete first at 9:45 followed immediately after by the women. Both teams are coming off of a tough meet last weekend at A&M.

Junior Alexandria Hackett took second overall, running a lifetime best of 20:11 for a 6k course. Teammate Diana Garcia-Munoz has also had a good season, coming in fifth last weekend to help push the women’s team to a third place finish.

With her outstanding performance, Hackett was named the Southland Conference athlete of the week for the second time this season.

Last year at the Chili Pepper Festival, Southland conference rivals Lamar finished with top place honors on both the men and women’s side. Munoz finished 36 in the 5k race while Hackett finished 54.

The men’s team is coming off of a 15 place finish last weekend in College Station where senior, Daniel Block lead the way for the Wildcats like he’s done all season.

At this meet last year Block recorded his fastest time of the 2014 season with a time of 26:24. Sophomore and number two runner for the Wildcats this year, Ryan Cleary ran 27:03 with senior Sterlen Paul rounding out the top three for ACU last year.

The men’s team received one new member this year, freshman Lincoln Jones while the women’s side received two, with freshman Aubrey Till and Carnley Graham stepping up immensely for the team.

This meet in the penultimate race for the Wildcats. They will travel one more time before they compete in the conference championship on October 30.