By Mercedez Hernandez
Posted on October 17, 2015 | FoodBlog,Opinion,Showcase | Comments Off on Larry’s boasts better burgers for 49 years 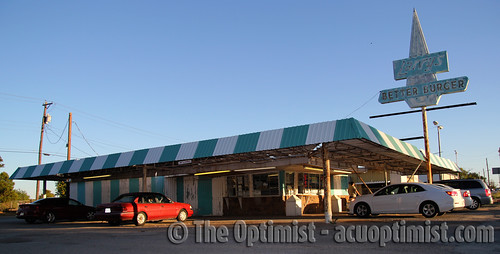 The drive-in sits at 1233 N Treadaway Blvd. and has been in business since 1967. The outside, although a bit tattered, only adds to business’ reputation of being a long-standing Abilene icon.

The business’s exterior maintains a touch of ’50s flair, the time period owner Larry Olney believes is when the structure was first built, with a motif of blue and white stripes on its tin roof covering and neon writing on its sign.

The best part of Larry’s Better Burgers is obviously their burgers; it’s in the name. But the restaurant offers other all-American foods like hot dogs, Frito pie and chicken strips.

In a time of peak health food culture, Larry’s throws all health concerns out the window. The burgers are as greasy as they are delicious, and the fries are no exception. How’s that old saying go, “It’s only good if you can see through the brown paper bag?” Well, Larry’s is that good.

The toasted bun, grilled patty and melted cheese of a Larry’s Better Burger offers visitors the chance to experience an old-fashioned burger at an authentic ’50s era drive-in.

ACU is even represented at the restaurant. About 35 years ago, Olney was approached by the university to create a special just for ACU students.

If you’d like to bite into a piece of Abilene and ACU history, try the Wildcat Special, which is a meal comprised of a steak sandwich, fries and a drink.

Olney opened the drive-in nearly fifty years ago and hasn’t stopped working a day since.

“I opened it because I needed to make a living,” Olney said. “I dropped out of college because my grades were too low, so I thought I’d try hamburgers.”

The drive-in could be a well-kept secret, as it seems like the only way to know about Larry’s is through word-of-mouth. Olney does not advertise yet still garners a following through pleased customers who are eager to share about their classic burger experience.

“We sell inexpensive hamburgers, no advertisement, no franchise,” Olney said.  “We don’t make a lot of money, but we make a lot of burgers.”

Similar to its old-fashioned look and food, Larry’s only accepts old-fashioned cold, hard cash, so make sure you stop off at the ATM before heading over to enjoy one of the drive-in’s all-American dishes.

Posted by Mercedez Hernandez on Oct 17th, 2015 and filed under FoodBlog, Opinion, Showcase. You can follow any responses to this entry through the RSS 2.0. Both comments and pings are currently closed.  - This post has been viewed 2173 times.
Related Posts: