Bears bowl over ‘Cats in Conway

By Collin Wieder
Posted on October 4, 2015 | Sports | Comments Off on Bears bowl over ‘Cats in Conway 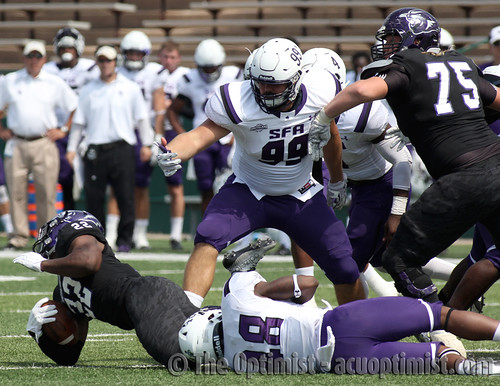 The Bears never let the ‘Cats get close opening up Saturday’s game with 32 unanswered points. The ‘Cats added two meaningless touchdowns, but could never get consistent play out of its offense. Quarterback Parker McKenzie spent a large portion of the game on his back as he was sacked five times. McKenzie completed 16-of-26 passes for 157 yards, two touchdowns and one interception.

Running back De’Andre Brown was a small offensive bright spot but never got to build on a nice game with the Wildcats falling behind early. Brown rushed for 90 yards at a 6.9 yards per carry average. Freshman tight end Cody Ennis caught his first pass and touchdown of the season, a ten-yarder before half.

The Wildcats defense continued its steak of allowing 200-plus yards on the ground by giving up 259. The run defense has given up 1,004 yards in just four games at an astounding 5.7 yards per carry average.

Sophomore linebacker Sam Denmark was the lone bright spot on defense. Denmark topped last week’s 18 tackle performance against SFA with a 21 tackle game against the Bears. Denmark has 59 total tackles this season and averages 14.8 tackles per game, both leading the Southland Conference.

Head coach Ken Collums said he was disappointed with the defensive effort by the ‘Cats.

“I didn’t expect our defense to be outplayed like it was, but we’ll go back and look at the film and get it figured out,” Collums said. “I still love our guys and this team, but we got what we deserved.”

The run defense will need to improve as Central Arkansas ranks at just the seventh rush offense in the Southland. ACU still has to play the number four rushing offense (Lamar), three (Sam Houston State), two (McNeese State) and one (Southeastern Louisiana).

The ‘Cats return to action next Saturday in Beaumont to play the Lamar Cardinals (2-2, 1-1).