By Daniel Zepeda
Posted on September 10, 2015 | Breaking News,News,Showcase,Sports | Comments Off on Wildcats partner with Nike for five-year deal 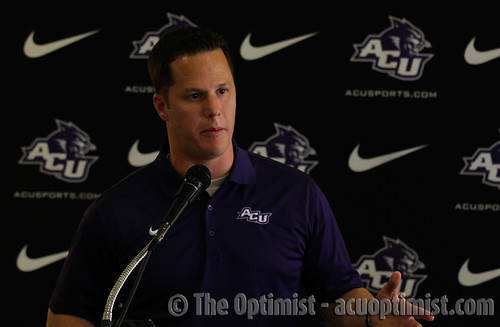 Athletic director Lee De Leon made the announcement that ACU athletics has agreed to a five-year deal with Nike.

The ACU Department of Athletics has agreed to a five-year deal with Nike to begin on July 1, 2016. Athletic director Lee De Leon unveiled the new partnership with the world’s leading athletics apparel company at a press conference in the Teague Special Events Center Thursday afternoon.

“Very rarely do you have the opportunity to partner with a company that is not only known world-wide, but also the leader in what it does, but that’s exactly what we have right now with our deal with Nike,” De Leon said. “Nike has been at the top of athletic apparel market for a long time, and we as a staff are beyond excited to announce this new deal.”

Starting next fall, Nike will become the Wildcats’ official athletic footwear, apparel and equipment provider for all sports on campus. De Leon did not disclose the dollar value of the agreement.

The new deal makes ACU the only university in the Southland Conference to have a partnership with Nike and only the fifth school in the state, after the University of Texas, Texas Christian University, Baylor and Southern Methodist University, to be sponsored by the athletics apparel titan.

“There aren’t a lot of schools that get to say that they’re a Nike school. Well, after today, ACU gets to say that we are,” De Leon said. “What this deal means is that we have a brand
here at ACU that the leading company in athletic apparel wants to be a part of. I want everyone to celebrate this because this is a huge deal for all of us.”

Oregon-based Nike is the world’s largest supplier of footwear and apparel and a major manufacturer of sports equipment, with revenue in excess of $30 billion in 2015. In 2014, the brand alone was valued at $19 billion, making it the most valuable brand among sports businesses.

“By January and February of 2016, you will start to see work to get the stadium done,” De Leon said. “We are making progress on the completion of the stadium on a daily basis, so although the opening did get pushed back a year, I have no doubt that the stadium will be opened on time for the 2017 home opener against Houston Baptist.”

Posted by Daniel Zepeda on Sep 10th, 2015 and filed under Breaking News, News, Showcase, Sports. You can follow any responses to this entry through the RSS 2.0. Both comments and pings are currently closed.  - This post has been viewed 6455 times.
Related Posts:
» The Road to Oregon: How ACU Became a Nike School - 09/15/2015