By Daniel Zepeda
Posted on September 8, 2015 | Columnists,Sports | Comments Off on Wildcats 4-1 loss to Aggies is a bigger deal than you think 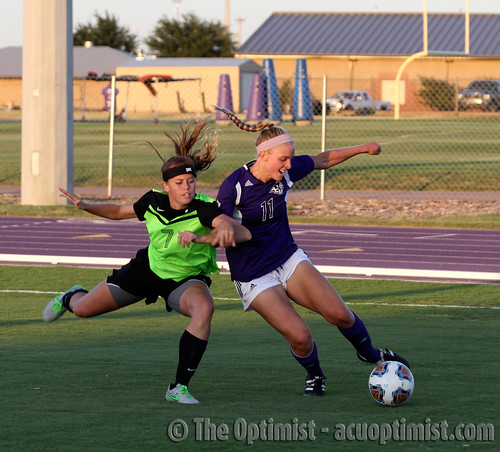 Last week, the Wildcats soccer program took on the no. 3 nationally ranked Texas A&M Aggies. In College Station, where the Aggies have gone 50-6-3 dating back to the 2011 season, ACU not only kept the game tied at one goal a piece heading into halftime, but also struck first against the powerhouse.

In front of a crowd of more than 2,700 fans, the visiting ‘Cats made it clear early on that the game would not be a walk-through for the Aggies.

In the end, the Wildcats gave up three goals in the second half and went home with nothing more than a moral victory.

But there is a lot more to this story than what the box score indicates.

ACU soccer owns a 1-4-1 record, which in comparison to the rest of conference, is sub-par to say the least. But at the level of competition this program has faced, the schedule of non-conference opponents the Wildcats have taken on is similar to those of top teams in the top conferences around the country. Some of their competitors have been Baylor in Waco, Arizona in Tuscon, North Texas at home, and A&M in College Station, with still more tough games approaching before conference season begins. The final two games the Wildcats will play before Southland competition begins will be against TCU in Fort Worth and the Texas Longhorns in our state capital.

But for head coach Casey Wilson, that’s just what the doctor ordered.

The plan from the beginning of the season for women’s soccer has been to play these tough programs to prepare for the Southland season. So although the Wildcats have gotten the short end of the stick in most of these contests, the benefits of these games go beyond the win-loss tally, which is something ACU is hoping for after last season.

The Wildcats finished 2014 with a 5-4-2 conference record, ranking fifth in the Southland. Against the four teams that finished better than ACU, the team went 1-3 in the match ups, with all three losing matches ending in 1-0 shutouts of the Wildcats. If the Wildcats had found their offense in those games, they easily could have won.

But this year, the Wildcats have a unique mix of experience and youth that should get ACU soccer fans excited. Already, underclassmen like sophomores Baylee Mitchell and Chantal Kinsey -who scored ACU’s lone goal against TAMU- and freshman Sophie Standifer and redshirt-sophomore Kate Seay have made huge impacts for the Wildcats.

When you add that to an already established core of experienced upperclassmen such as senior Lindsey Jones and juniors Natalie Throneberry, Maria Gomez and Kelsie Roberts, there are a lot of options.

Looking at the goal keeper position, the team becomes even more grounded. Junior Kelsey Dombrowski has been solid in the box for ACU so far this season, given the level of competition she’s gone up against. She owns a .750 save percentage and saved eight shots in her outing against UC- Irvine, in which her shutout helped lead ACU to a tie on Aug. 30.

Her backup, junior Sydney Newton, has been just as good. When Dombrowski sustained a head injury against North Texas last weekend, Newton became the starter and set the ACU soccer record with 14 saves in a game. Last season, the two split time in the box, with Dombrowski getting 12 starts and holding an .839 save percentage and Newton starting in six games with .797 save percentage.

The program is on the right track. After being a dominate force in the Lone Star Conference, it’s time for the team to begin down the road that ends with becoming a powerhouse in the Southland. They have the tools and the future looks bright with young talent and Wilson at the lead. Luckily for the rest of the conference, ACU is still in the probation period.