By Collin Wieder
Posted on September 9, 2015 | Columnists,Sports | Comments Off on Loss to ‘Dogs deeper than win-loss column 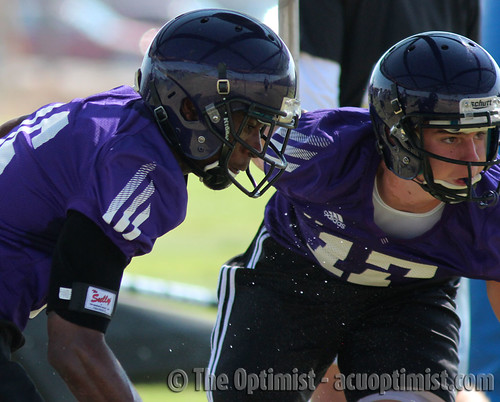 ACU football fans got their first glimpse of the 2015 squad last week in Fresno, California as the ‘Cats dropped a rough opener to the Bulldogs, 34-13.

The tough thing to takeaway is that first and foremost, Fresno State just had more talent than ACU. The opener should be viewed as a barometer of how far the team has come in the offseason, not necessarily what is in the win-loss column. It is great to have high expectations, but the Bulldogs have yet to miss a bowl game under Fresno State coach Tim DeRuyter. This wasn’t a team like Troy or Georgia State where they were similar skill level to the ‘Cats. Everyone should understand this before we get into the game’s analyzation.

Defensively, there was a lot to be excited about, especially from the secondary. The Wildcats gave up only 217 yards passing and a completion percentage of 49 percent. The secondary also intercepted two passes and looked strong despite the loss of starting corners Keith Barnett (ACL tear) and Terry Ausborne (transfer). Freshmen played a large role in the game showing a lot of positive signs of the future. Redshirt freshman Cedric Dale tied for the team lead in tackles with eight and freshman safety Junior Henderson recorded his first career interception.

On offense, the team played an efficient, turnover free first half keeping them in the game. Junior quarterback Parker McKenzie took what the defense gave him and went 10-for-14 for 96 yards in the first half. Redshirt freshman quarterback Dallas Sealey showed some spark on offense, which included his first career touchdown pass to fellow redshirt freshman Byron Proctor. Senior wide receiver Jonathan Epps doubled his catches from last year snagging eight passes for 55 yards.

The ‘Cats defense struggled mightily against the run as Bulldog senior Marteze Waller slammed the ‘Cats for 154 yards on a 7.0 yards per carry average. However, he will probably be the toughest running back the ACU defense will play all season.

The defensive backs deserve a lot of praise for their performance, but big plays in the passing game proved to be a weakness of the defense. Fresno State quarterback Zack Greenlee’s three touchdown passes were 25-yards or more.  That may reflect poorly on the secondary, but it also reflects poorly on defensive pressure. Greenlee’s first touchdown pass was caused by a missed sack. The Dogs’ quarterbacks sat pressure free in the pocket as the defensive line didn’t record a single sack.

Parker McKenzie’s second half could not have been more polar opposite from the first. He completed just 8-of-15 passes for 72 yards and two interceptions. The interceptions were the most glaring mistakes as both were thrown straight to the defense. The pressure on McKenzie didn’t help either as he and Sealey were sacked a combined five times.

The backfield can’t really be seen as negative because they never really got going. Similar to Georgia State in 2014, the running game had to take a backseat to keep up with a high-flying offense.

Houston Baptist is the perfect team for the ‘Cats to return home against. They can get back on track and prepare for some of their bigger conference games. ACU outscored HBU 128-26 over the last two seasons.